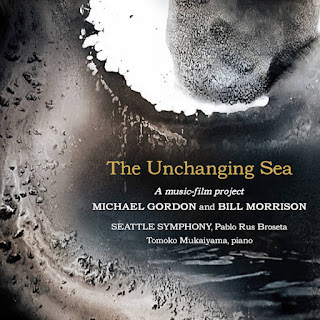 What does it take to be a great composer? Is it ever the same? Well, what Clementi needed to create the Piano Sonatas in yesterday's program is surely something different than what Michael Gordon brings to us in The Unchanging Sea (Seattle Symphony CA21141 CD and DVD), a remarkable new orchestral work that is the soundtrack to Bill Morrison's film of the same name. Whereas the Clementi sonatas relied upon an acutely inventive linear feel for unspooning melodics and significant form as underlying structural architecture, the Gordon work (as a sort of exemplary world of New Ambiance) takes a kind of all-at-once great idea in sound, which then of course succeeds or not by its sequential unraveling of the very large sonic moment. That does not mean of course that a Clementi kind of musical mind is not welcome in the New Music realms today, but that there are other more canvas-like parameters that also captivate us when works are in this new world of possibilities. So for the sake of my recent posts you might well say that Finnissy is closer to a Clementi in his linear view, and perhaps Gordon ultimately is a working though of the first real insights of the Mannheim School of orchestral music, culminating in a first climax in Beethoven's Symphonies. Two strains, both as New Music is now.

And if that is a sort of bold assertion for the first thing in the morning, it is deserved in this instance. For this is a work of true evocative power, nothing quite like anything else, though it stands in relation to another orchestral work of similar power, John Luther Adam's Become Ocean (see review from October 23, 2014).

The intense aural imagination that goes into this work is extraordinary. It is an orchestrational coup d'etat, nothing less. For it creates the aural image of a seascape that has a timelessness and mystery redolent with vast expanses of shifting, splurging, rocking, sprawlingly awesome and endless strength. The piano part is in the beginning hammering and relentless like the continual energy of sea on life. It later in essence becomes a concerted vehicle of expression, then joins the orchestra as a key rhythm instrument, and all quite musically and happily. The strings and winds give us an uncanny blurring of the endless pliable force of the sea. There is incredible depth of field to the changing panorama of sounds. You hear the vast unfolding of many mini-tidal events as they meld together into a widely diffuse unraveling. And the music changes, never remains fixed at any point.

This is Post-Minimal of course, yet that does really have some meaning, in that there are envelopes of endless recurrences and the hugely beautiful swells of oceanic sound. It is what Minimalism sought to do, only it does it without reliance on set changing patterns. There is underlying pulse much of the time but it is there in some ways like it has always been in "pre-Minimalism," as a kind of given that ticks a timeless time underneath  the musical events.

The CD includes a half-hour Sea as we can hear it in the movie. That is followed by the 15-minute Beijing Harmony that is not a part of the film. I have been listening to the music without reference to the liners so all this time my mind has conjoined the two works as a sequence, and perhaps that is all for the better, since to my mind the second work amplifies the swelling drift of sounds in different ways from the title work. They manage to be of a piece in the experience. One follows the other like "Refrain" follows "Kontakte" on the original 1959 instrumental-electronics recordings of Stockhausen's masterworks. Perhaps even more so, in that Gordon's two works are even more of a piece together.

Well and so to turn now to the Bill Morrison film would imply that the DVD that features that is almost an afterthought? It most certainly is not. The film is as hauntingly singular as the music in its own way. Morrison makes a narrative out of diverse pieces of silent-era film directed to the sea in the life of the time. So the narrative goes from man-woman-sea as a triadic thing to the dreaming woman on the rock and what follows is the sea as destroyers of men--footage of shipwreck and rescue dominate the film's central section, played out always as the deliberate and thematic inclusion of time itself as undermining force in our oblivion--the beautiful-horrific sight of film badly deteriorating and at times totally obliterating the image to put on a fascinatingly sculpted play of water damage, celluloid deterioration or light damage competing with standard image, like a vast inferno of meaningless negation threatening to engulf us all.

I can only say that the film-music DVD is unforgettable. Yet in the end the music is something monumental on its own. This disk qualifies to me as a front runner for New Music disk of the year. It escapes from the Faberge Egg endlessness of Minimal repetition to find another linear path outward, to liquidity, water and an endless mass of water! My highest recommendation for this one. Time in the end prevails over endlessness? It is a lesson for us?