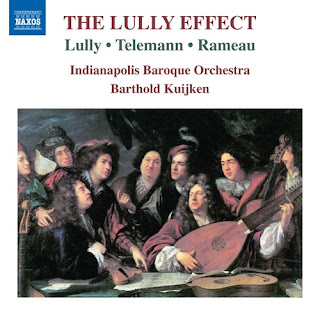 Here on a Monday morning I contemplate The Lully Effect (Naxos 8.573867). What is it? Simply put, it is sounding like Jean-Baptiste Lully (1632-1687), a French composer of originality and depth.  Once you hear a few of his compositions, provided they are well-chosen and properly played, as is the case very much here, you understand that of all the Baroque masters of his time, he did perhaps more to establish a special musical identity beyond the intrinsically contrapuntal than anyone elsewise, and for better or worse ushered in a different sensibility that in various ways were extended and realized in the ensuing Rococo phase that followed years later. That may be a bit of a gross simplification, but for a Monday morning that is what I generally come up with when left with my current resources!

Seriously though, The Lully Effect is all about Lully's mature sound, the way he presented a music for chamber orchestra that came in part out of the less contrapuntal dance suites and ceremonial court fanfares of his era and created a lyrical yet massively large sound with a strength of line and a sweetness of timbre we do well to hear in a period version as we do here. The Indianapolis Baroque Orchestra under Barthold Kuijken gives us the sound as it was meant to be then, in works by Lully and his sometimes followers Georg Phillip Telemann and Jean-Philippe Rameau. Neither composers cleaved to the Lullian "galante" style consistently but instead made music in their own image as well much  of the time. No matter however, for they show in these examples how attractive and stirring Lully's influence could be in the hands of talented later practitioners.

The orchestral forces heard here have a pristine beauty that of course resides first off in the scoring of the respective composers. And that has much to do of course with the blocks of instruments and the way that they outlined the primary melody away from prevailing polyphony to more of a homophonic and heterophonic direction, with a kind of uncanny blurring of principal melodic orchestra parts in ways that thicken the texture, a special advance coming in part out of the dance music of the time in the everyday life of France of the period. Key to the performances we hear in this recording is Kuijken's research and application of appropriate bowing techniques as mapped out in various sources plus a wealth of ornamentation practices. We hear in the results a more heightened sonority that we are used to with this music. It goes far in underscoring the beauty of the sound as intended by the composers in their day. That and the unusual (for us) instrumentation-sound of blocks of winds, harpsichord and then in the strings--violins, violas, cellos but also a number of violons. The first violin parts are generally doubled by a number of players and at times repeated in the woodwinds; the bass parts are strong and pronounced; the middle part is by style a relatively lighter voice in the whole, giving a sort of shimmer but decidedly not meant to equal the principal line.

All this is the case and happily so in the three main works we hear in this program.The Lully is the overture and an instrumental interlude from his opera "Armide." Rameau gives to us a long instrumental suite culled from his opera "Dardanus." Finally Telemann gives us a five movement orchestral "Ouverture (Suite)."

The performances are delightful and go a long ways to make us appreciate the irresistible charm of the music. Is there a "Lully Effect?" Sure! And you can hear it to happy advantage on this fine recording! Very recommended.