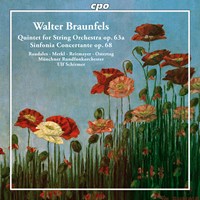 And why is it we do not much know of the music of Walter Braunfels (1992-1954)? The short answer may be that his music was not exactly radically Modern? But it was not archaic either, judging from the new release of his Quintet for String Orchestra and the Sinfonia Concertante (CPO  777 579-2).. We listen a few times, or I did, and find that there is a wealth of good invention and plenty of inspired content. The performances are in the very capable hands of the Muncher Rundfunkorchester under Ulf Schirmer. It is a superior performance and sounds quite well indeed.

The liners tell of a definitive Braunfels biography published in 1980 which has done much in helping assess his legacy. He played piano, composed, taught. The liners tell of a man who kept somewhat to himself. Breakthrough instrumental works were forthcoming in the '20s along with the successful premier of his opera Die Vogel . He was the son of a Jewish jurist. The National Socialist coming to power put his career in jeopardy and he was designed as one of the so-called degenerate composers. All of this had some hand in the fact of Braunfel's relative obscurity in the Modern era despite the outward success of his last years. By the post-war period there were new voices that shadowed over someone like him and so too others who did not espouse a Serialist view.

So what of the works? Both come from his later period and both are substantial. The two contrast pretty nicely, giving you two distinct impressions. The first piece is actually a Frithjol Haas arrangement of Braufnels "String Quintet op. 63a in F sharp minor" which seems like a very good idea. Maybe in part because of the chamber-blown-up-large aspect of the source parts there feels like a distinct relationship between this work and Schoenberg's celebrated "Verklarte Nacht," which is known especially in its string orchestra arrangement of what was originally intended for string sextet.  The music has a  highly chromatic, edge of Late Romanticism kind of expressivity that Schoenberg's Nacht also has. The lyrically melancholy, searching quality of much of this has definite torque. It is some 40 minutes of deeply felt and carefully thought-out music that belies Braunfels' bask in obscurity. The concluding rondo nearly startles with its folk robustness

With the 20-minute "Sinfonia Concertante op. 68," scored for string orchestra and solo parts for violin, viola, and two horns, we get a more detailed sound spectrum befitting its intention for large ensemble. There are magnificent folk-lyric passages, chromatic whirlwinds of expression, a musical personality that seems fully fleshed out, and a kind of edginess at times especially with a sort of characteristic curmudgeon grotesquery contrasted with at times a pastoral-peasant hearty quality and then high expressivity as well.

The performances give us a true view of the definite talents and originality of someone we mostly now know very little of in terms of repertoire presence. A concentrated series of repeated listens brings to us a rather brilliant musical mind so that the more one listens, the more one discerns a real presence in the music of talent and steadfast inventiveness.

I must say this disk constitutes a find! It will bring pleasure to anyone who seeks another voice from the early days of the last century. It is like the ghosts of Mahler and young Schoenberg inhabited a third personality of originality and made a very fruitful re-working of what was on the ground at the time. Very much recommended!
Posted by Grego Applegate Edwards at 8:15 AM