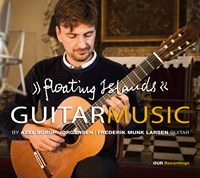 Danish composer Axel-Borup-Jorgensen (1924-2012)  is one of those 20th century musical figures it takes some time to appreciate. I have covered a number of albums of his music on these pages and perhaps only now with this new album of music for guitar named Floating Islands (OUR Recordings 8 220672) do I feel like I have learned thoroughly his musical language. Nearly an hour of Borop-Jorgensen solo guitar works are the order of the day, played articulately and elegantly by Frederik Munk Larsen.

Four pieces from the"Floating Island" series are included, as well as five more works in single or multiple parts. It is generally High Modernist in its structural harmonic edginess with a syntax all his own. "Islands" is an apt description, as often the works phrase in single or short multiple units, each in itself a floating body to to speak. So they may be harmonics, staccato chords, softly-voiced simultaneities, singular notes or short phrases, you name it. Each section hangs together and poeticises a guitar sound in depth.

It is refreshingly pristine music that holds its own and continues to fascinate each time you hear it. I strongly recommend this for all who appreciate New Music for guitar. Bravo!
Posted by Grego Applegate Edwards at 10:36 AM