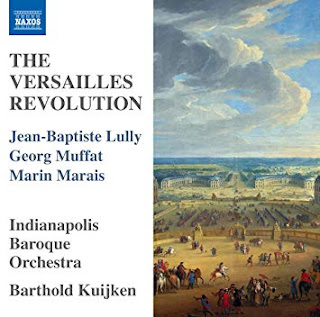 As we happily hear in the first volume of this program of the music of Lully and his followers (The Lully Effect, see listing from several months ago), the theatre-ballet that grew up around the French court of Versailles in the later 17th century was uniquely orchestral, expressive and dramatically lush in ways no music before had been. The main impetus for the bold new sound came from the orchestral concepts of Italian violinist Jean-Baptist Lully (1632-1687), a major figure in the court music of the period.

This second volume looks closely at the stately ceremonial minor mode instrumental music for court theatricals. As with the previous volume the Indianapolis Baroque Orchestra under Barthold Kuijken follows the practices of the period faithfully as to instrument makeup (original instruments) bowing and sonorities to recreate the rather stunning intended effect.

And like the previous volume Kuijken  has chosen a representative Lully composition, "Suite from Roland" (1685), plus two additional works by other renowned members of the court, namely George Muffat and his "Fasciculus I, 'Nobilis Juventus' from Florilegium Secundum" (1698) plus Marin Marais and his "Suite from Ariane et Bacchus" (1695).

This is very engagingly sonorous music with a doubling of the principal melody line via massive strings and winds not completely in unison. By definition the sound is like nothing other. There are beautifully contrapuntal passages that contrast to the melodic dramatics in ways that simply ravish.

It takes the care and detail of Kuijkin and the Indianapolis Baroque Orchestra to make this music stand out as the exceptional thing it is. This and the previous volume are indeed milestones of their kind. It brings the orchestral French Baroque to us as it truly was meant to be heard.

And for that both are highly recommended!
Posted by Grego Applegate Edwards at 9:33 AM