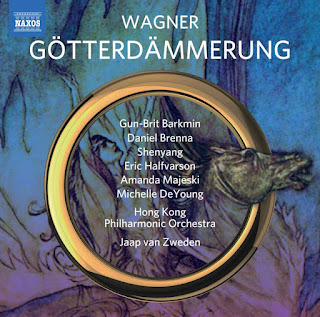 I would type here that Wagner's Ring is in many ways the Holy Grail of Late Romanticism in the Modern Era but then one might justifiably respond, "No, that is Parsifal!" And if that seems funny to me maybe I am a hopeless nerd? I do not care. Humor must be sought out on dreary days no matter the source.

Nevertheless of course the Ring is one of those masterpieces that is almost superhuman. It defies what one composer could do, was allowed in the last half of the 19th Century to do. Bach may get the awe response after we count up his Cantatas, but Wagner is a Modern-Era champ. So what in the end is the Ring. Four very long operas on a central, cumulative mythical theme plot, with the entire libretto and all the music written by one man, who manages to make it all a huge success....Sure, but it all could have ended-up being a boondoggle dog, right? But no, Wagner was as brilliant or perhaps even more brilliant than the hype on the day suggested,

I do not suppose anyone reading this does not know something, no doubt a great deal of something about Wagner and the Ring. And probably you reading this already have a version of the four-opera sequence to plunk on your system when you feel the urge? Well if you don't I must tell you that what I have heard of the full Ring just now complete--by soloists, choral forces and the Hong Kong Philharmonic Orchestra under Jaap van Zweden--is quite good. I reviewed their Siegfried  on these pages some time ago (see index) and now I am happy to report in on their cycle-concluding Gotterdammerung (Naxos 8.660428-31 4-CDs).

What is good about the two performances of the last two, concluding Ring-cycle works (and I will assume that same of the Hong Kong versions of the opening operas in the series though I have not yet had a chance to hear them)? All of this is an object lesson about the continuing, ever-dependable virtues of Naxos as far and away the premiere Classical Standard Repertoire Budget Label. Why does it matter? In a world where most of us are not endlessly wealthy Naxos when functioning properly (it is) can provide you with very competitive performances of works generally well represented on recordings. There may not be at all times the star-power list of famous performers for all the works, but of course the idea is that the music-first approach can oftimes allow you to get very reasonable prices on such things. For the Ring and its 16-or-so CDs that can be crucial.

So why is this a nice choice? For one thing as a digital recording of the present-day it is sonically glowing. Dynamics and balance are all excellent and the orchestra is very well-staged in terms of the audio set up in standard stereo. Like most of us I have heard many Ring recordings over the years and there are undoubtedly some that have made an everlasting impression on me the Hong Kong sounds as good or better audio-wise as any.

Secondly the Hong Kong Philharmonic under van Zweden has all the fullness and balance of the large orchestral Wagner sound as we demand today and he set out for us then. The strings, winds, brass etc. bring out the nuances as Wagner intended them. It is a delight to hear it all! Then the choral ensembles and soloists are big-sounding and dramatic as very much needed. Gun-Brit Barkmin and Daniel Brenna as Brunhilde and Siegfried may not quite rise to the heights of the historic very best in hallowed recordings but they stay the course with heroic stamina and that's very fine. The same can be said for all the vocalists appearing in the cast.

The leitmotivs fly by like moths into light throughout and overall there is the bracing exhilaration that we seek in the Wagner experience. I cannot say after a few listens I am anything but satisfied with it all. And when I must I can dig up some of the Kirsten Flagstad excerpts from long ago to remember how high she could fly! That in the end is separate from hearing the whole of the Wagner saga.

Take a listen to some excerpts online to get the feeling for this cycle. The van Zweden Segfried  and Gotterdammerung come though remarkably well for budget recordings! I imagine that same would go for the beginning operas. An excellent bet. Recommended!