John A. Carollo, Music from the Ethereal Side of Paradise 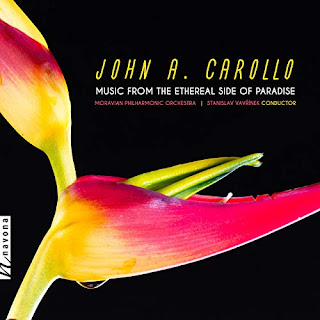 In John A Carollo we have the very living composer, resident of Hawaii, the fashioner of New Music that I consistently find worthwhile and disarmingly interesting. There have been a fair number of releases on Navona and other labels in the last few years and I have covered most of them (type his name in the search box above for the relevant reviews). Now there is a new one and it is one of his best. It is appropriately titled Music from the Ethereal Side of Paradise (Navona 6148).

The program is an interesting mix of ensemble configurations--string orchestra, guitar and violin, solo violin, guitar, choir, solo flute. Each work has its own personality, partly urged on by the varying potentials of the instrumental configurations, partly because the composer is firmly in a Modernist yet variably oriented camp. In the end there is always something personal and original that emerges from his work. But that can span a wide range of possibilities, sub-stylistically speaking.

Hearing his music involving guitar is a treat because he has an idiomatic vision of what the instrument can do and so too the guitar stands out as well as blends nicely with other instruments as called for, specifically the violin in this case. Christian Saggese performs the works on here that call for solo guitar. The "Romantic Passione Suite" is handled by the familiar, dedicated and talented Duo 46 (Matt Gould on guitar, Beth Schneider on violin). Christian sounds like he is made for the parts he plays. The corresponding "Guitar Prelude No. 3 - The Tai Chi Set" plus the "Guitar Etudes Nos. 7 & 9" are high points of the program with an inventive flow that stand out as quite noteworthy.

But there is lots of very good music to hear on this program, well performed and very Carollo-ian! I very much find the "Music for Choir" to my liking and so too the string orchestra works "Awakenings" and "Bright Stillness." Yet the small chamber works serve to separate out and contrast the larger ensemble works from and with the other. And so we also hear the musical sense and feeling highs of "Metamorphosis No. 3 for Solo Violin," and the "Metamorphosis No. 13 for Solo Flute."

It is all good, all worth hearing, all primo examples of what one might dub "Middle Modernism," or in other words New Music that treads a middle ground between eclectic Tonality and Avant dashings into outer space.

Carollo occupies his own turf consistently and originally. This is an excellent example of his way for those unfamiliar and an excellent addition to the collections of those familiar! Kudos!
Posted by Grego Applegate Edwards at 9:29 AM

Email ThisBlogThis!Share to TwitterShare to FacebookShare to Pinterest
Labels: john a carollo music from the ethereal side of paradise classical-modern review, new music tonal yet exploratory, us composers today