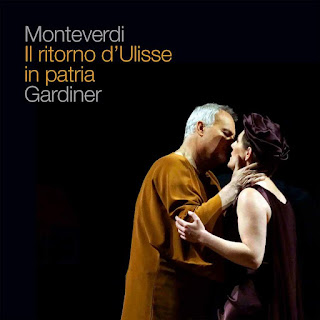 I can pinpoint in my head the time when I first got a hold of Monteverdi's Il ritorno d'Ulisse in patria, via the first release as the VoxBox LPs by Rudolf Ewerhart Santini and the Kammerorchester (Munster), etc. It was the inaugural recorded version, though missing parts in order to fit it all onto three LPs. I took to it right away and for whatever reason used to revel in the recitative sections among other things because of the prominent harp part that other versions I have heard are lacking. No matter. I can pinpoint the time because I was living in Brookline then with Berklee roomates. We were on the top floor and parallel to us was an apartment occupied then by a Professor of Indo-Pak music who at the time taught at Boston University. Our balconies adjoined and as I was listening to the Monteverdi and lounging on the balcony one summer night the Professor struck up a conversation that was quite interesting. He first wanted to know why I listened to such things. My answer was involved in the idea that there were world legacies and one chose from them but that the Western Classical tradition was something I was interested in assimilating from a compositional perspective, etc. Turns out he liked of all Western musics Bluegrass best, and thinking about it even now I understand. The timbre of the vocals, the banjo as a sort of sarod, etc. I suddenly heard classical Bluegrass as might a Classical Indo-Pak musician. So that was the summer of 1973. And so my first important exposure to Early Music Opera.

Wikipedia reminds me that the only manuscript version we have today is a three-act manuscript dating from 19th century Vienna. The work was premiered in 1640 and really it was from the 1970s on that the music underwent significant revival in our world.

I later supplemented the Santini version with the early '70s first complete recording by Concentus Musicus Wien under Nikolaus Harnoncourt. That to me was superior in the way it pursued updated original instrument performance practices, but there were things I liked about each  and I kept the both versions actively until some upheavals threw my vinyl connection to the winds in part. The path from version-to-version reminds me how I assimilated the music, first primarily in melodic-harmonic terms, later also the timbral uniqueness of the era, and finally as a whole in relation to other wholes of the period and beyond. As a very first Opera in the history of such things it was of course important to hear but then the brilliance of Monteverdi becomes primary early on because the music stands out and bears up wonderfully well.

And now I have the pleasure to be introduced to a brand new version of the complete opera as performed by distinguished soloists, the Monteverdi Choir, and English Baroque Soloists (instrumental), all under John Eliot Gardiner (SDG 730 3-CDs). It comes in a very attractive hard cover book-like package with full libretto and notes.

The performances in the Gardiner version are excellent. This may be the finest singing of any version I have yet to hear. The soloists have a wonderful grasp of the embellishments available and sometimes delve into the music with an emotive gusto one is used to hearing in later Italian Comedic style. And it works nicely. The instrumental parts are played with great vivacity, care and attention to period detail.

After 46 years living with this music my enthusiasm is undiminished. Monteverdi is inventive to a point rarely reached by any composer regardless of the period and there is an almost folk-like directness to much of the music here that Gardiner brings out especially well. In fact of the three versions I have lived with this one stands out as the most detailed and sonically engaging. Perhaps Monteverdi's first opera Orfeo is the more exciting work to many listeners, yet there is something to Ulysses that sets it apart as completely unique. Anyone serious about the musical heritage we inherit should probably have a recording of this opera, and this recording seems to be the new benchmark.

That is not to say that my neighbor was wrong about Bluegrass. You should listen to that too! But that is another matter among other matters.

Highly recommended.
Posted by Grego Applegate Edwards at 8:28 AM