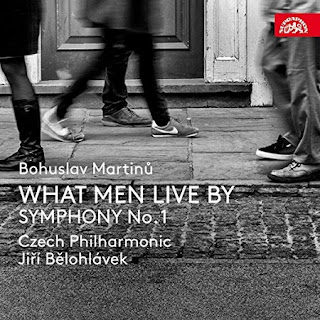 Is Bohuslav Martinu (1890-1959) less widely played now than he was at his death? I am not sure, but it is possible that his music is in a steady-state suspension since then, neither gaining more of a following nor less. His was a rather enormous output. The liners to the present release tell us he wrote no less than 10 operas before WWII, and another six after that. Add to that a large body of orchestral works and so on. There is a great deal. Perhaps not everything he did is in the classification of landmark classics for all time? I cannot say for sure on that front. What counts is the works we can appreciate now and how we should evaluate them.

Today's new release gives us two very worthy works in live performances, namely the World Premiere Recording of the "opera-pastoral" What Men Live By based on the writings of Tolstoy, and Martinu's very appealing Symphony No. 1 (Supraphon 4233-2). The late Jiri Belohlavec does a fine job directing the vocal soloists and the Czech Philharmonic in this 2014 recording. He was one of the foremost Martinu exponents and one gets a happy glimpse of such matters on this program.

What Men Live By is in English. It was written in 1952 while the composer resided in the US, hence the English libretto which the composer himself wrote based on the Tolstoy short story Where God Is, Love Is. The music itself has a level of Neo-Classical invention that we come to expect from the composer. It is a welcome addition to what we can now appreciate in recorded form and all Martinu lovers will certainly welcome it. Its extreme brevity (here 37 minutes) makes it an opera not likely for widespread performance even today, but the quality of its musical settings is quite high and one revels in it in the recorded format here. That is, if one is more or less pre-disposed toward the composer as I am. His brilliant use of the orchestra, choral forces and soloists make it a central offering among undiscovered 20th century works. The rustic tale of a village cobbler and his epiphany was obviously congenial to the composer, for the music sparkles throughout in folkish ways that the performance captures fully.

The coupling of the opera with Martinu's First Symphony of 1942 is a great idea as it marks two moments in the composer's US residence, the end of the first period and then also the beginning. The symphony also fits in with a somewhat folksy Neo-Classicism. It is a work of great charm and weighty ideas and Belohlavek gives us an evergreen of a reading, detailed and bursting forward with animation. There are other versions by the conductor, most notably in his complete symphonies release, but this version and the way it plays off against What Men Live By makes for a singular and more inclusive vision of the master composer in a very fertile period.

For those predisposed, this is a real addition to the Martinu collection, but too even one not familiar with the composer would gain a nice introduction to his music.

I recommend it strongly and happily.


Posted by Grego Applegate Edwards at 9:30 AM