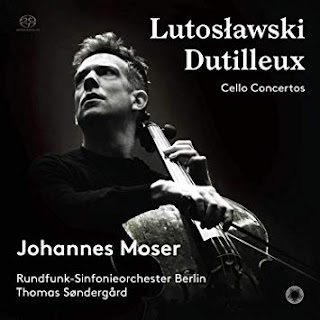 One can go through most of one's life of course without hearing certain works, in today's case the Cello Concertos (Pentatone PTC 5186 689) by Witold Lutolawski and Henri Dutilleux. One might have been the better no doubt if one heard them first in a more youthful period of life but missing something is inevitable I suppose because in the end as much as we try to swim with the very moment we live in at the flowering of Modernity we must be somewhat de-synchronized, at least one step removed from sequential actuality at times, if not more. It turns out that Lutoslawski's "Cello Concerto" and Henri Dutilleux's "'Tout un monde lointain'' (Cello Concerto)' were both completed in 1970. Both are fully characteristic in general of each composer in that time, and happily it is some of their finest work of this or any point in their careers. If you may have missed them like I have, now is the time.

And what of us, if we were alive then? In my case I was in no position to be exposed to either unless by chance a well-distributed budget label came out with a recording. That was more or less the only chance I might have had of hearing the music then. That says a great deal of the importance of those budget lines to the musical upbringing of a young lad such as I. At any rate I do not recall either composer being accessible to me in any way in those days.

All the better to have something new and worthwhile to hear later in life. We are fortunate with the present-day release of the works that they are played with Promethean drama by cellist Johannes Moser and equally, spectacularly seconded by Thomas Sondergard conducting the Rundfunk-Sinfonieorchester Berlin.

The Lutoslawski is an expressive landmark of the period, vividly filled with alternating High Modern brimstone and reflective meditation in ways we find Lutowslawski especially superior in setting about. The cello part is in every way heroic and transcendent while the orchestra parts comment upon the solo passages and create new expressive situational possibilities in ever masterful and convincing ways.

The Dutilleux is no less monumental in its ambitions, and no less successful in its results. Nevertheless he looks inside his musical creative self for another kind of inventive moment, more memory intensive perhaps, in a Modern-Impressionist reverie. The music moves forward in ever vibrant, rhythmically linear terms. Perhaps the music is somewhat less momentously High Modernist, but then there is a color-lyric element that replaces the Lutoslawski dynamic and we feel on different grounds, no less vivid but stylistically other. That is good.

It would be hard to top the performances. Moser is fully prepared and also fully in tune with his part and the orchestra has passion and intelligence under Thomas Sondergard. The works are central highlights of the last part of last century. Indispensible I would say.
Posted by Grego Applegate Edwards at 9:46 AM