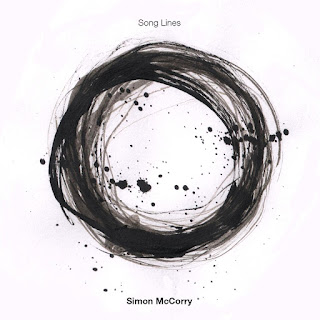 There is music that defies easy classification. What peg hole to stuff it in? In the old bricks-and-mortar days that was an immediate problem as well as a thoroughgoing one. What section should the album be in? So Frank Zappa was nearly always in the Rock bins and at least at the start that was quite sensible. I can remember though when Verve started venturing forth into Rock the Schwann catalog assumed (amusingly to me at the time) that all of it had to be Jazz. That's what Verve did! So the Mothers of Invention's Freak Out and the first album by the Velvet Underground were listed under New Releases, Jazz! But then it might have been prophetic, since just after Jimi Hendrix died readers of Downbeat voted him into their Hall of Fame. Some people were upset about that. In the end though what did it mean?

And so today I duly report in on an album that has gotten my attention and indeed my approbation. It is called Song Lines (Naviar Records) and the music is by Simon McCorry. Is it "Classical?" It is drone, it is soundscape, it is Radical Tonality, it is post-Modern. It fits into the New Music fold perfectly well and perhaps we should leave it there and just listen?

The music is in five segments or movements. Each is magical in its own way. Some of the sounds seem sampled from conventional instruments, some Electroacoustic in a wider sense, in others I hear strings, cellos, quite obviously at some point a tabla. In all cases there is a snug fit between means and ends.

The main idea is that this music has a folksy magic to it that is quite beautiful. Every part fits together with every other part and the music seems at all times purposeful and directional. There is the Indian echoes of the drone to be felt much of the time, and a modal-elementality well thought-out. The music has the density of a small chamber orchestra most of the time. The weight and the movement of the music seems at all times right for itself though.

I suggest that this will appeal strongly to you if you are in any way drone-scaped in your soul. Highly recommended for those who self-select according to that critereon. Nicely done!