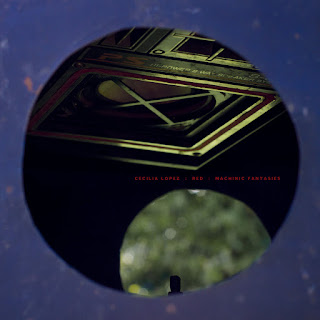 From Cecilia Lopez this morning we have a 2-CD set of what one might call Industrial-Sustain-Process-Noise Electronics Soundscaping. It is called Red - Machinic Fantasies (XI Records XI 140 2-CDs).

The first disk is the "Red" part. It was created-recorded in October 2017 at Harvestworks (NYC) as part of her Harvestworks EAR Residency. Five parts make up the whole. Imagine a whistling tea kettle as a basis for a sound universe, only there is no tea kettle, no sound like that but then a sound not entirely un-like that, either. That is a good start to understanding "Red" at least from the outside.

Kurt Gottschalk in the liners raises a question. Is this music recordable? Of course the fact that it has been released as a two-CD set makes the question philosophical and possibly rhetorical. Kurt notes that Frederic Rzewski first made this comment in his hearing on stage in regards to the music of Morton Feldman. Maybe, Kurt thinks some more, no music is recordable. Well sure, we always make some compromise in the totality of an "is" when we agree to reduce a three-dimensional world of the "actually making" into sound only. or even with a video, sacrifice some of the sensual itness of the music for a flat-screen and loudspeaker equivalent. And the immediacy and inter-interminateness of the "live" situation freezes when embedded in recorded media. Yet it was originally there and so is captured for us nonetheless.

The point Kurt is making too of course is that there is something conceptual about the performing of Ms. Lopez's music, an action element that can only be missing in the frozen dialectic of "then" in a recording. But so too we have today a fetish for process at times in the Modern music world and cool for that but like O. Henry's shut-in in the story of the "Last Leaf" the point for the beholder who cannot be there in person is this the Piagetian "there-gone" dichotomy maybe? It is a child-like state we enter and it has an amnesiatic component. We only know the "here" if the recorded hear and we forget the rest of life's here-ness endlessness.

So back to "Red."  It is a layered tapestry of sustains and partial presence-sounds and it is not uninteresting with successive hearings. It is quite interesting in fact, or it is to me.

"See Your Food" was the name of the cafeteria in my neighborhood in Chicago years ago and perhaps Mr. Gottschalk is right. The seeing and knowing how something exists may be a good deal more than the sheer facticity of its existence.  So seeing your beans and franks before and as you eat them. Is it live or is it Memorex? Well of course in the CD world everything is Memorex. Just like movies are created out of hundreds of sound and image bits, so music necessarily. Only then too with commercial recordings like film releases "live" is a thing we are denied. So that we reconstruct the thereness of it, even if in studio music it is a make-believe all-over all-at-once thereness. Like a painting is a composite of moments of painting. And so alas to that but so also all the better in that we can reproduce it for ourselves at will by simply putting it on.

So yes, "Red" is available to us in this recorded version whenever we want. As the composer responded to Kurt Gottschalk's quandary, "it doesn't do justice" to the work itself, no doubt. But then a work is only in potentia always so long as it is not sounding, and so a not-sounding-at-all to the listener is the larger injustice to the work I guess. isn't it? So we might be happy for this release. I am.

The second work, "Machinic Fantasies," filling the second disk is the more conceptually interesting of the two. That is not to say automatically that it is the most sonically interesting. It was commissioned by and recorded live at Roulette in New York in 2018. The main part, the centerpiece of the work is a kind of turret-tial civil-war derived gatling gun sounding while rotating at the turn of a crank. It is the composer's ingenious adaptation of the old gun mechanism with a loudspeaker affixed inside it, so that sounds partially revolve, devolve and counter-volve I suppose you could say. Cecilia creates the matrix of actions that are the composition and she also creates the electronics. There are two "performers, spinners" and then also a trombone and a trumpet player. As it turns out the processually interesting operations create a sound universe that too is most certainly stunning. So there we have it.

And in the end I come out of the listening with the feeling that I have engaged with two works that are very definitely of interest sonically. It is a "home made" sonic design series that excels in that the innovative processual element intervenes into the performance space to make present a world we can re-create in the recorded space of "play back."

And so we have something that fascinates and jogs the aural imagination. If you are willing to suspend judgement and just listen patiently, you in time enter two meaningfully open sound spaces. Very recommended if you are willing to travel some distance to let this sound sculpture perform inside of you.
Posted by Grego Applegate Edwards at 10:03 AM