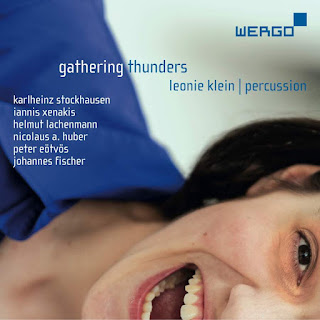 The High Modern period of Classical Music has seen the rise of percussion instruments as a widespread aspect of orchestral, chamber and eventually solo instrumental music. Varese's "Ionisation" for large percussion group made concert audiences take notice. John Cage and Lou Harrison wrote some widely discussed and performed works. Flash forward to today and we see the near ubiquitous development of virtuoso solo percussion works where the individual is called upon to play many instruments at the same time, becoming a sort of one-man band or an orchestra of one, taking advantage of the heightened sound color contrasts a battery of percussion instruments offers.

An excellent program of such virtuoso solo works can be had, played with world-class musicality and technical wizardry on a new album by Leonie Klein called Gathering Thunders (Wergo 7375 2). The repertoire addressed on the program covers some recent works in New Music echelons and classics going back to the years when solo percussion compositions were considered rather daring. In most cases here an array of pitched, semi-pitched and unpitched instruments form the nucleus around the complex klangfarben, sound-color melodic structures each piece demands in its own way.

It takes a real master not only to get all the notes right, with intricate instrument-to-instrument jumps a constant virtually always. To play this music properly the percussionist must think in terms of the overall phrasings, must in a way conduct herself or himself and seek a total balance of near-orchestral syntax.

Perhaps nowhere is that more the case in telling ways than on Stockhausen's classic 1959 "Zyklus." In choosing to perform the work as a solo piece the performer then has the freedom to choose the order of the 17 sections and the direction she or he chooses to move in completing a single cycle of moving across the complete array of spatially situated instruments. Ms. Klein shows us a singularly melodic interpretation of the work, one of the best I've heard. That advanced musicality shows itself too on the works that follow in the program, each individual and special, sonically and syntactically.

From there we hear the distinctive all-in-one color peaks of "Psappha" by Xenakis, of "Interieur I" by Helmut Lachenmann, of "Pothos" by Nicolaus A. Huber, and then Peter Eotvos's "Thunder" for a single bass timpani and Johannes Julius Fischer's "Gathering" for "prepared and extended xylophone."

It altogether gives us a bird's eye view of the state-of-the-art in current performance practice and in compositional best practices today and yesterday. It is a veritable whirlygig of percussion sublimity and so will heighten  the pulse rate of anyone who loves the Modern and the percussive arts. Leonie Klein is a wonder! Grab this one if you suspect you'd like such things.