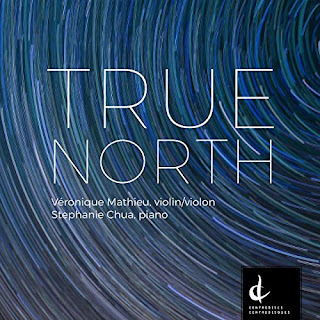 We get a full disk today of Canadian violinist Veronique Mathieu and pianist Stephanie Chua in a program of works written between 1996 and 2016 with a single work coming from 1916. The album is entitled True North (Centredisques 24417).

Ms. Mathieu and Ms. Chua trip the light fantastic with a dramatic sense of expression and a remarkable sense of balance and poise. The works vary from the Neo-Impressionistic Healey Willon "Sonata No. 1" written in 1916 and revised in 1955, to a solid block of Contemporary Modern fare, five works by five living composers we may not know very well but each with a true sense of what violin and piano together can accomplish, written between 1996 and 2016.

The six works in all pose different solutions each to the challenge of giving violin and piano something more, something new, something not yet heard. So they do it, every one of them. The emphasis is not on cutting edge daring but rather highly worked-over and highly focused, well wrought and thoughtful Classicism. Not necessarily Neo-Classicism, but ever contentful music.

So we are treated in addition to the rather magical Willon work,  the expressive, virtuoso Modernism of "Gradual Erasures" by Adam Scime, describing a passage from life to extinction, the field recording clapping and such from a lake outside of Toronto juxtaposed with exploratory music in "Cherry Beach" by Brian Harmon, a Stravinsky-Prokofiev inspired "Danza" by Maria Molinari, with a bittersweet waltz that sweeps us into a reverie and reminds us of Prokofiev's "Cinderella," "Adagio," aka "The Mermaid's Lament" by Heather Schmidt, and Alice Ping Yee Ho's violin showcase piece "Extasis."

This is serious music that calls for serious listening, and the big upside is that you gain by what ear-time you give this program. It is all about what we are all about now! And the artistry is superb. It is quite worthwhile and recommended.
Posted by Grego Applegate Edwards at 9:01 AM