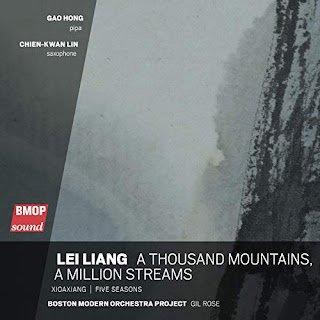 Chinese-born composer Lei Liang brings to us a completely lucid sensibility and a most articulate and evocative syntax. The Boston Modern Orchestra Project album of three recent works shows us glowingly the vitality of his invention. A Thousand Mountains, A Million Streams (BMOP Sound 1061) gives us the title work recently (2017) commissioned by BMOP, plus his "Xiaoxiang, Concerto for Alto Saxophone and Orchestra" (2009, rev. 2014), and "Five Seasons" (2010, rev. 2014).

Liang came to the US in 1990 as a young man, in time moving from a concentration on piano to composition, and finding his voice through studies at New England Conservatory and eventually a PhD from Harvard University.

While involving himself in his compositional studies he found himself reconnecting with Chinese culture, lifeways and traditions which then in turn informed his music. Columbia's Chou Wen Chung he acknowledges as an inspiration.

The music to be heard in this program before us shows us a vivid Modernism, a lively pictorial imagination and a landscape artist's sense of panorama and open skies. And the influence of traditional Chinese music too can be heard, in the most tangible ways on "Five Seasons" which features a concerted solo part for the pipa, played dramatically and effectively by Gao Hong. Then too Chien-Kwan Lin's alto sax on "Xiaoxiang" has a spatial-temporal feel that feels at times rather Chinese.

It is on the title work "A Thousand Mountains, A Million Streams" that we hear the current culmination of Liang's musical vision. It is sound-color-centric (and so too is traditional Chinese music you might say), carving a vibrant language from the various ways of sounding the instruments of the orchestra and soloists, as applicable. A concern with the natural landscape reminds us of the legacy of Chinese poetry and painting. The music recalls in its very own Chinese-informed way the innovations in sound clustering that later High Modernism perfected, which for those attending to it still stays with us as a part of conceptional and orchestrational color practice today.  Lei Liang has the acute ability to build sound structures and expressions that revisit the orchestra in those terms and then give it all a personal and culturally rooted stamp of identity.

One can learn a great deal from reading the liners to this album. I leave that to you.

The music itself gives us a true contribution to the "new" in New Music. Lei Liang speaks with his own voice, his own orchestral poetics, very much Modern, very much Chinese in its essence, and masterful in utterance. Highly recommended. BMOP comes through with another gem.

Posted by Grego Applegate Edwards at 9:38 AM