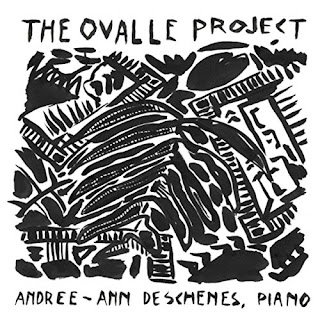 Self-Taught Brazilian composer Jayme Ovalle (1894-1955) is best known in his home country for composing the song "Azulao." Outside of Brazil he is little known. However the new two-CD set The Ovalle Project (Self-Released 193428153240) gives us pianist Andree-Ann DeSchenes's fine readings of the complete 24 work opus of solo piano music.

Ovalle has some of the "outside art" daring of a self-taught composer with something to say and no set formula about how to say it.  There are at times a sort of Romantic declamatory pianism a la Rachmaninoff or Liszt, yet the way of going about it is Expressionist, like a German woodcut, in other words more robustly "primitivist" at times. At other times you might find an almost trance-inducing repetition of a chord alongside a melody line, nearly art-less yet artful for it paradoxically..

The Brazilian strain can be heard in this music--mostly through the melodiousness of the songfulness. And there is a folkishness to it, too,  that gives it all an individual flair. Not so much choro-like, not especially simple to pigeonhole or to even put into words. Brazilian fantasias? At certain moments. The way it comes together is so rather unexpected that it genuinely takes a few times through before it starts making its own sort of sense. Sometimes the chordal voicing has a definite modern tang to it and an almost jazzy contemporary quality, really.

If Charles Ives were Brazilian, would his piano music have sounded like this? Not exactly, but not exactly not at times, either. They both have a stubbornly independent manner and as you listen again and again it starts to make perfect sense. And as you get to the later opus numbers there is sometimes emergent a Brazilian rhythmic element as a block-chorded melodic thing with a left-hand figured accompaniment that is intriguing. But then there is a return to Expressionist rubato, again too.

It is music that refuses to stand pat, to stay put, to slot into the derivative, and all the better for it. Ovalle brings us a way of sounding that is his own and Ms. DeSchenes draws that out in an effective and sympathetic set of performances. This is something different, a Brazilian musical Grandma Moses so to say. An unconforming original, a strikingly wayward crafter of piano delicacies that are good to eat and good to think! Get this and go someplace different.

Posted by Grego Applegate Edwards at 9:18 AM