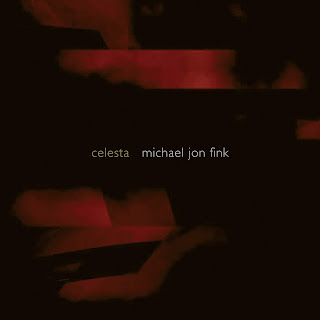 In one of the latest Cold Blue releases we get some remarkably resonant music for celesta. It is a program of dream-like sequences, 12 pieces in all by Michael Jon Fink. The album is simply entitled Celesta (Cold Blue Music CB0053). The music is all of a piece, wistfully in a Radical Tonality zone, yet too one feels the ghosts of Erik Satie and the John Cage of "Cheap Imitation" and perhaps of Morton Feldman too, but never directly, instead rather as the kind of nocturnal ambiance that, hmm, I suppose might ultimately go back to Chopin at times.

What makes it "radical" is the nearly intentless melodic form.Yet there is periodicity and elemental song form at times too, like a music box lullaby, like the stuffed animal my friend had when we were both probably three-years old? Music boxes and celestas have common tone colors of course and perhaps the wind-up boxes of childhood one recalls involuntarily when one hears the instrument.

Yet it seems that Michael Jon Fink is aware of all that on some level and captures what the celesta was meant to sound like with music that is not unlike music-box Satie, perhaps. It is captivating, almost childlike, moving and a catalyst to a Brown Study steady state. Recommended for sure.
Posted by Grego Applegate Edwards at 8:35 AM