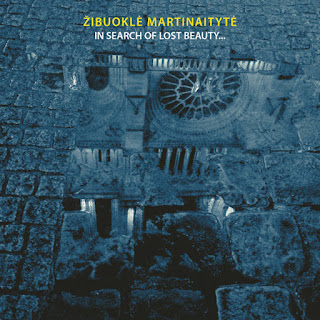 Is programmatic music back? Yes and no. It may not be so literal anymore. Not like Richard Strauss where the violin might mean so-and-so and the horns such-and-such. But there is a literary patina that envelops some of New Music today. And it serves to poeticize our listening mind when it works well. I have zero complaints on that front with Ziboukle Martinaityte's In Search of Beauty... (Starkland ST-231).

Martinaityte's programmatic intent is loosely poetic. One rainy day she went past the Notre Dame Cathedral and had a kind of epiphany when the puddles reflected aspects of the cathedral in multiple bits, showing a different reality, a different beauty not otherwise available to her. This is interesting especially to me because I noted something similar here the other day in the rain puddles reflecting the vertically upstanding trunks of trees as I went on a walk in the morning. It is a coincidence but then a mindfulness I was also experiencing.

What counts ultimately is the ravishingly evocative nature of the music. It has ten parts and lasts 70 minutes. There is a singularly refracted soundscape to be heard that does not remain the same ever. It sustains with near-drone continuity yet has punctuations that break through the blanketing sounds. An arpeggiated violin line starts midstream and develops intermittently over time. And the sustains evolve into a rolling dialog between the three instrumentalists responsible. There is a poignant sonic artistry to be enjoyed in FortVio via piano, violin and cello. There are electronics too at times and they serve to sustain us further. They give us more sustenance, if you will.

The liners map out the composer's world better than I can so I quote from them here. "An hour-long sequence of audiovisual novellas on the elusive subject of beauty - an attempt to recreate the experience in which time is slowed down in order to transport us into an alternate dimension where the commonly apprehended reality is inverted into the otherworldly mystique of reflection and shadows."

So the whole concept behind it all has a richness of meaning. And the music fully lives up to the promise of the poetry behind it. That is saying something. It is one of the best ambient forays I have heard lately. It passes by Minimalism to become "free" from the need to stick to sameness. Instead sameness and difference intermingle without a sense of rulebreaking or transgression. There is Radical Tonality that comes closer to Non-Western World Drone than typical of New Music today, yet does not adhere rigidly to itself either. It is a betwixt-and-between thing that as it remains hovering above possibility refuses to become everyday-ordinary, which is the composer's point, her vision.

So there is a modeling of the idea of the extra-normal reality represented by the puddle images as felt in the unraveling of the music itself. Not a sense of coming apart, though. Rather there is a sense of refraction, of reflective sound shapes unveiling. It is a music of Color Fields, not quite Frankenthaler-esque but really there is a sort of affinity there if you look for it.

I do recommend this quite definitely. It is neither here nor there and that makes it a special sort of "where." Listen!
Posted by Grego Applegate Edwards at 9:34 AM