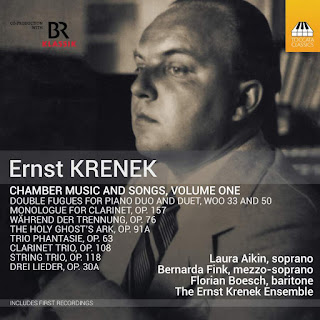 Ernst Krenek (1900-91) lived a long life, so long that he was not so well remembered in his last years as he should have been, at least in the States. Yet in his day he was one of the great Modernists of Vienna before WWII summarily sent him packing to seek refuge in the USA. All the history and biography he embodied in his 91 years we more or less set aside for now as we concentrate on the recent Chamber Music and Songs, Volume One (Toccata Classics 0295). It reminds us in the best ways how vital his music was and remains today.

The Ernst Krenek Institute co-produced the album with BR Klassik and the result is an extremely happy one to my mind. Soprano Laura Aiken, mezzo-soprano Bernarda Fink, baritone Florian Boesch and the Ernst Krenek Ensemble give us optimum readings both sympathetic and fully precise, expressive and definitive. The works cover a considerable span of time from 1917 to 1949/61. There are gems in abundance and several first recordings.

The liners tell of a kind of epiphany Krenek experienced when a student as he read a study of Bach's fugal writing by one Ernst Kurth, which as Krenek recalled in later years asserted that music was not "a vague symbolization of [emotion] instinctively conjured up into a pleasant sounding manner, but a precisely planned reflection of an autonomous system of streams of energy materialized in carefully controlled tonal patterns." So we hear the 1917 and 1918 "Double Fugue" first recordings for four hands and two pianos, respectively, which came directly after Krenek read that book and in many ways set the tone for Krenek's brand of Modernism, which coincided in a basic sense with the Viennese School as a whole, of the outlooks of Reger and Hindemith and of the later developments in Darmstadt. Yet he was his own voice even with those affinities, as the volume shows nicely.

The seven additional works in this volume wear remarkably well, from the expressively classic vocalisms of "Drei Leider," "Wahrend der Trennung," and the "Holy Ghost's Ark" to the instrumental sublimity of the 1949/61 "String Trio," the 1929 "Trio Phantasie" for violin, cello and piano, and the 1946/55 "Trio for Clarinet, Violin and Piano." It all is in every detail masterfully worked out, in varying ways a Modernist, tonally expansive and edge-vibrant analog of Bach's fugalities.

After listening a good number of times to the 75 minutes of this first volume I have been increasingly impressed and taken by the whole of it.  There are multiple strands of Krenek to be heard here, with a more ravishingly Expressionist Modernism holding sway on the "Trio Phantasie" as compared with the Bachian structural splendors of the String Trio and the Double Fugues.

I must say that this volume impressed me greatly with its wealth of wonderful music. There no doubt remains a great deal more that has we need again to hear in his extremely prolific output. I look forward to further volumes!

Strongly recommended.
Posted by Grego Applegate Edwards at 9:09 AM