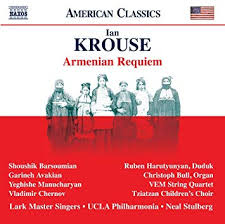 As a composer in the Naxos American Classics Series, Jan Klouse (b. 1956) comes center stage with his epic and dramatic Armenian Requiem (Naxos 8.559846-47 2-CDs). It is a work to meditate with solemn resolve on the centenary of the genocide of Armenians in 1915. It is music that comes out of the Requiem-specific Armenian liturgical chants, and does so with a spectacular assemblage of fine vocal soloists along with Ruben Harutyunyan on duduk,  Jean Libdemann and Bobby Rodriguez on trumpets, Christoph Bull on organ, the VEM String Quartet, Tziatzan Children's Choir, the Lark Master Singers and the UCLA Philharmonia, all under the capable direction of Neal Stulberg.

Such an ambitious gathering fills an hour-and-a-half of our time with a sprawling expression that goes back to classic sacred music oratorios surely, but too has a mindfulness of parallel Modernity in the landmark Passions of Penderecki and Part, and other advanced New Music expression, here tempered by an Armenian modality lurking in the shadows of the expressed, there without calling undue attention to itself.

And then too there is Britten's War Requiem, which the Naxos cover info avows as an influence, an important one. To quote, Krouse was inspired by that work to fashion "a poignant meditation on loss couched in a marriage of Western and Armenian forms" to offer "both conciliation and hope." I concur that this is the case as I listen to the music with concentrated and increasingly sympathetic attention.

The music is not precisely cutting edge not is it a backwards movement, yet if you set that concern aside you hear a veritable spring garden of musical delights, seriously miened, soberly comported yet hopeful, not without beauty and drama.

It is a monumental endeavor that pays dividends by close listening. You might want to make this a part of your contemporary collection, especially you who want to enrich your experience of Sacred Music.

I do recommend this.
Posted by Grego Applegate Edwards at 8:02 AM