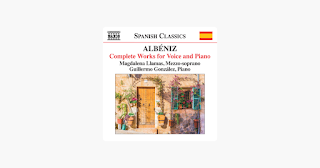 Isaac Albeniz (1860-1909) of course represents one of the primary pioneering compositional voices in what blossomed forth into the Modern Spanish School by the later early decades of the 20th Century. His Iberia remains his most celebrated and singular single endeavor, yet there is much more to hear and appreciate in his entire output.

Many of us outside of Spain itself are less familiar with his songs than we should be. That is remedied handily by the Complete Works for Voice and Piano (Naxos 8.574072) as sung by mezzo-soprano Magdalena Llamas with Guillermo Gonzalez at the piano

There is a substantial 70-plus minutes worth of music on this collection, some 31 songs grouped in various sets dating from 1887 through to his final period in 1909.

There is a wealth of finely turned music to absorb, showing a kind of oblique deflecting of Spanish folk music elements into a very personal impressionist introspection that in the end is original and at times complexly expressive.

Magdalena Llamas gives a very projective reading of these songs. She is rather in her own way as individual as the composer, and we do find the music filtered by her artistry to a significant extent. Nevertheless you hear everything with the emphasis that the composer no doubt intended. The vocal arts are necessarily intensely personal. I recommend you listen to the music a bit yourself and let yourself respond to the vocals in whatever way you see fit. One no doubt will find much to like in Maestro Gonzalez's piano accompaniment. It and the piano writing itself are high points to my mind of this set.

Recommended for anyone interested in the Modern period of Spanish musical art. and too for those who would like a bit of musical adventure!