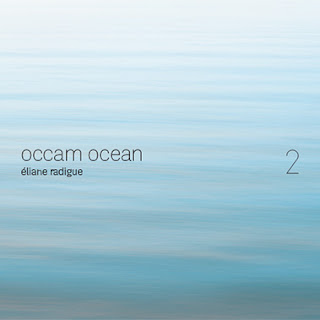 There are bagpipe or Indian Music drones, there is the droning of early choral music and then there are hyper-Modern drone-oriented pieces, whether acoustic, electric or both. Eliane Radigue is a master of the latter genre (in either "instrumentation") and has been for many years. A latest release finds her in great form, namely Occam Ocean 2 for orchestra (2015), a full-length work that slowly evolves in the most complexly interesting timbral, rather legato and somewhat seamless ways.

She was asked to write the work for the ONCEIM Orchestra, by Frederic Blondy, the Director-Conductor. (They perform it in this recording.) She eventually agreed when she thought of the work as a kind of solo for the conductor avec musicians. Listening to the work it sounds like a continuously floating and changing mass of sustain, like an ocean, with Occam's Razor there perhaps to trim down any excess though it is deeply resonant as a sound world, fascinating and exhilarating to hear.

Radigue comments in the notes that in some ways all her earlier electronic works were compromises compared to the rich expressive possibilities of the acoustic orchestra. And in this way Occam Ocean 2 finally gives us her potent and uncloaked advanced drone world in its full acousticity? Yes, it does, sure.

The emphasis is on the massive sustain on top of a key centered pedal that continually shifts timbre, range and instrumentation, not so much drone as elemental continuousness. That distinction matters as you listen because it is not at all fatiguing as a simple drone might be all by itself, at least to me. She piles great complexes of poetic sound and lets then shift and shimmer with time like the sun on blue-green tidal flows.

She also asked that she meet each one of the orchestra members in her own apartment space, to get to know them in order to write the more effectively each part.

The final work as performed here is a glorious thing of many shifting parts, an ocean of sound with  tides flowing and ever entailing and prevailing.

I find this music to be enriching and satisfying. It is New Music High Avant and the "orchestration" is incredibly full and unprecedented in some ways--they all blend so thoroughly it sounds like Electronic Music only more timbrally alive. Wow! Strongly recommended as what is happening right now. Now is now!