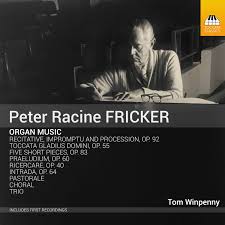 When it is a matter of organ music and Modernism of course Messiaen has been by far the most influential and inspiring figure. He continues to captivate as virtually no one else in our times.

There is the matter however of English composer Peter Racine Fricker (1920-1990), whose Organ Music (Toccata Classics 0518), as played by formidable organ Modernist Tom Winpenny, gives us an alternative, convincing look at Classical-Modernist possibilities, a rigorously and thoroughgoing imaginative view of what can be said in tone.

He was in the '50s and early '60s a celebrated Modernist in English circles but then went somewhat out-of-fashion with the rise of more avant styles, which was compounded by Frick leaving Europe to accept a teaching position at the University of California at Santa Barbara. The move was to define in many ways the course of his later life. It allowed him to keep on but effectively kept him out of the European limelight.

This first-ever recorded compilation of his organ works is revelatory in its portrayal of the brilliant contrapuntalist, dissonant Modernist and dramatic-melodic organ dynamist. Some eight works and one five-piece grouping grace the program. All save the short "Pastorale" are in First Recordings, which is saying a great deal, as we are talking about some 75 minutes of music.

Significantly all but one of these works were written between 1965 and 1985, when he was a resident in the USA. If nothing else it marks the bulk of his organ music as later output, comparatively speaking, if this selection is any indication.

One thing to be said for the whole of this, Fricker tellingly conveys an intensive brilliance of musicality that is always filled with significant form, from the contemplative to the bitingly severe.

This program is magnificently performed by Winpenny and should be of great interest to any follower of English 20th-century composers, or indeed of the Modern organ. The musical content should intrigue anyone who has serious concern for developments in our contemporary musical worlds. A landmark recording, this is.