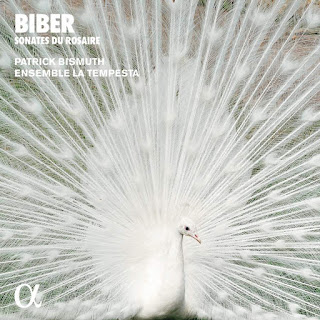 When I was a budding music enthusiast, still in high school, I came across a Vox Box three-record set of the Biber (1644-1704) Sonatas Rosenkranz or i.e., Sonates du Rosaire, or i.e. The Mystery Sonatas, featuring violinist Susanne Lautenbacher. I found it at the rccord chain Harmony Hut in Wlliowbrook, NJ and as all the Vox Boxes then the asking price was $3.99, a remarkable bargain. I had no idea what it was but at that price I could afford to explore. And as it turned out I fell under the spell of the music completely and never have turned back. And here we are some 48 years later!

The scordatura (non-standard tunings) of the intricate solo violin part and the well conceived dialogical continuo of organ or harpsichord and strings remain to me a riveting distinguishing aspect of this music. The Lautenbacher version still sounds great, especially at times mysterious, almost South Asian Baroque (well, not really but there are occasional drone-implications, as latent on the organ continuo parts especially--and always there is something exotic about it). All the elements come together and Susanne is triumphant.

Over the years there have been other versions but I've still come back to that first LP one. Now, just now there is another new version and I must admit it gives me a rather lovely alternative. The violinist is Patrick Bismuth and he is accompanied quite ably by Ensemble La Tempesta (Alpha Classics 2-CD 491).

What this new version has to differentiate it from the Lautenbacher is a great period resiliency--especially via a continuo that swells and expresses more plasticity of interaction. Bismuth plays with less fire than Lautenbacher but then there is a more Baroque expressivity too. Each sonata is further differentiated stylistically in this version--each stands more on its own as an entity style-musically--but then that mystery is less apparent, too. So it does not take over the field so much as offers another path toward the performed sound, so to speak.

And of course all the better for that, since one version necessarily does not negate the other as is ever the case. I like both, and am glad to have this new version to hear repeatedly. There is nothing quite like these Biber sonatas and the version sparkles nicely. Highly recommended.

PS Try listening to this totality of sonatas per the composer's intentions as given in the section headers--the first part dubbed as "joyous mysteries," the second as "sorrowful" ones, the third the "glorious mysteries" and then the final piece for the "Guardian Angel." It is a cohesive Biberian iconography, in many ways, of his music-meaning mind and this version gives us further insights into that. Such things fascinate me and I hope you as well.
Posted by Grego Applegate Edwards at 6:26 AM