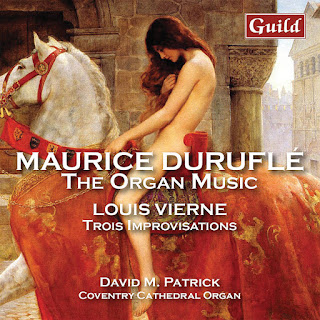 Both Maurice Durufle (1902--1986) and Louis Vierne (1870-1937) represent a further flowering of the French Organ School in the 20th century. They did not take things quite as far as Messiaen did in terms of the Modernist impetus, yet they shared with him a symphonic expansiveness, a dramatic demeanor and a melodic-harmonic sophistication that put them at the inventive forefront of organ progressivity in their day.

To place us into the direct musical stream of both composers we have a recent disk that I have been increasingly delighted to check out, involving organist David M. Patrick giving us Durufle's Organ Music and Louis Vierne's Trois Improvisations (Guild GMCD7804).

The disk provides Durufle's complete output for organ, which is a handy and enlightening thing.

Durufle's "Prelude" from his "Suite, Op. 5" (1930) sounds related to the old "Dies Irae" Requiem hymn theme, and goes far in harmonically expanding the altered motive to make it gritty with dissonance, then florid with ornament and contrapuntal implications. The "Prelude" of the "Prelude et Fugue" is a maelstrom in a labyrinth and needs to be heard! The "Toccata," again from his "Suite, Op. 5" (1930) is as bracing a whirlwind organ climax as you are likely to hear. Excitement reigns supreme and we thrill along, or at least I do after a few listens. But it's all good.

The Vierne "Trois Improvisations" as reconstructed by Durufle are inspired and supercharged. Durufle was Vierne's (and Tournemire's) pupil and you can hear the connection of course and so too these improvisations serve as a two-prong offering--for the importance of Vierne and his inventive brilliance, and then of course for how he connects stylistically with his pupil.