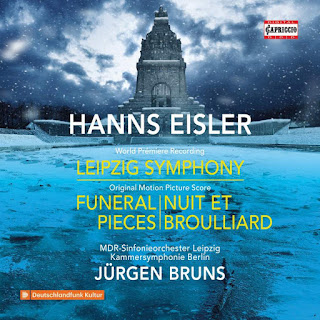 If you are from the States and know something of 20th century cultural history, you might know why composer Hanns Eisler has been in many ways surrounded by a shroud here. He was one of the notable composer refugees to America in the Nazi period (a formidable bunch of brilliance), was blacklisted and forced to return to Europe after embarking on a promising film scoring period in Hollywood, a victim of the Fulbright Hearings. It explains the obscurity now but the music has begun to become a most welcome thing over the world in the past quarter century anyway. And I personally find the music quite intriguing. He was a master scorer and inventive soul despite finding himself exposed on the left in a world that had turned to the right.

And now we have another release of note, with Jurgen Bruns conducting alternately the MDR-SInfonieorchester and the Kammersymphonie Berlin in a very intriguing program of a once-lost but happily significant symphony (The Leipzig Symphony) and some intensely interesting music from film scores (Funeral Pieces of Motion Picture Scores and music from Night and Fog) (Capriccio 5368).

The music is rich, deep, quirky-original much of the time and there is a good deal of it. The film scores are very symphonic and so it all is a rather vast treasure of a Modern mindset that nevertheless takes as homage moments that you know are almost a paraphrase of Mahler and Bruckner, and then lyrical sadnesses, grim sarcastic marches that reflect his involvement with Brecht and other contentual anti-Nazi moments as of course you might expect to encounter by Eisler in certain moods and with given semantic aims and etc.

It shows us an Eisler who was fully conversant with the musical era he followed upon as well as funereal sorrows and other film-score oriented moods. The latter and their original function in the various films can remain separate for our listening aims without the least difficulty. This is symphonic music first and foremost now.

He was a composer who gave us perhaps as much or more of the anguish of his era than many others then (Shostakovich and Prokofiev come to mind also) and that dark mood does dominate at times but memorably so.

The performances are first-rate and the music stands out as good and even masterful. Listen and you will find a composer of his time we a universality that can still move us today. Perhaps Eisler is going to take a chair in the 20th century modernist pantheon after all, or at least some of these works will. This program shows a composer worthy of our ears, surely. This one is for all Modernists. Bravo.

Posted by Grego Applegate Edwards at 3:56 AM