David Haney, Birth of a City, For String Quartet and Improvising Quartet 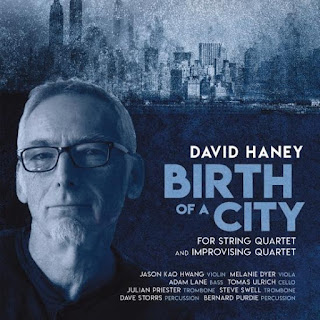 David Haney is a well respected avant improv pianist and composer and succeeded Bob Rusch as the owner-editor of Cadence Magazine. I have appreciated his free-wheeling improvisational forays for a long while by now, but I have not had the pleasure to hear his ambitious compositional outlooks until this new release. But I am quite glad I have! Birth of A City for String Quartet and Improvising Quartet (Big Round) gets my attention and keeps it..

This is music that defies expectations--in the sense that its pronounced "Third Stream" essence comes out in decidedly more contemplative than explosive ways. I would not have precisely expected such a thing as a cosmic explosion, certainly, but the music comes through less as a combustion and more as a concentratedly individual, as implied form in freedom,  like spontaneous sparkling glass beads on endless strings. Two sets I suppose you could say? That is two for the two works here--"Birth of A City" in eight parts, "Variations on a Theme" in five parts, the latter with some of the more overtly Jazz-oriented thematics at times.

The artists are exceptional players all and expectations have some role for what I know of them--that they can be quite extroverted but that isn't what they are called upon to do here. Instead they fall aptly into a special kind of way to sound that Haney sets out in the scores.

The String Quartet consists of players well known for improvising as well as interpreting written form--among other things. So there is Jason Kao Hwang on violin, Melanie Dyer on viola, Adam Lane on bass and Thomas Ulrich on cello.

The "Improvising Quartet" is an interesting and unusual mix of jazz trombone titans Julian Priester and Steve Swell as pitted against the percussion of Dave Storrs and the traps of drum legend Bernard Purdie.

The beads of light on two strings I think of when listening to this program come to us with exacting written parts juxtaposed with a good deal of improvisational freedom. It all comes across as a kind of virtual set of inaudible pedal points that frame the ever interweaving key centered horizontal poignancy and vertically subtle heft.

It is music that quietly but concentrically unwinds spell-full particularities that at first blush seem unassuming but then increasingly stand out in well wrought and eventually enthralling ways.

Kudos to Maestro Haney and company on this one. Do not expect so much "x" or "y," for this is "z" and all the better for us! Heartily recommended for all who seek to explore the new music improv nexus today.
Posted by Grego Applegate Edwards at 5:52 AM