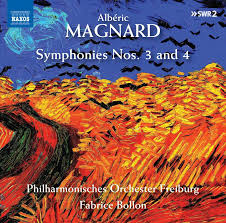 If Alberic Magnard (1965-1919) is something of an acquired taste, it is mostly because until recently his music was not so easily come across outside of the local context. In the USA years ago when I first started exploring Classical music he was not a name one heard much, let alone was there easy access to the music. That is now changed, at least as far as his Symphonies Nos. 3 and 4 (Naxos 8.574082). There are versions available now (many for some time) and I am happy to be listening to one--the new Naxos release with Fabrice Bolton conducting the Philharmonische Orchester Freiburg.

The works are sterling examples of Magnard as a fully mature symphonist (No. 3 was completed in 1896, No. 4 in the year before his death, in 1913). Bolton and the Freiburg orchestra give us measured impassioned readings, not too overwrought, which is a key to this music sounding as Late Romantic in a somewhat Wagnerian manner yet Gallic, daydreamingly thoughtful as a pre-Impressionist brown study. There are occasions where the themes seem almost folkish a la Vaughan Williams, only French and earlier-Modern-period-on? That comes to me as I write and listen.

The music has a special sort of glowing continuity--like a waterfall it rolls on and on with sustaining sound that is symphonic with a centrality to the bowed string as a way of thinking musically. He may have composed these at the piano but it all flows in ways that pianos do less of--and so the magically long-toned breath of woodwinds mixes together potently with the endless arm-bow continuity of the strings.

That does not mean that there is a schemata or formulaic quality to this. By being so waterfall-like it is only in its density, not in a note mesmerizing way--because of course in his day there was an expectation that there be motival variational post-repetitive sequencing and development which we get quite nicely. And the thematic content is not quite Modern so then it does not fit with other symphonists of the early Modern period exactly. At times there is a bit of Wagner, yes, but not for long stretches. Like Berlioz there is a personal singing quality here that looks back less than stays inside a selfhood.

This personal originality becomes more apparent as one listens with some repetition. At first it is never-ending and continuous and what that consists of is not as easily grasped because the melodics are not simple nor obvious at times but nicely evocative of themselves and Magnard's musical self.

Both the 3rd and the 4th are fully fleshed out and complete unto themselves. The LP era, since both come in around 40 minutes time, was well suited for just one symphony on a single 12" disk, but of course we get the bonus of both together with the CD era. It may be too much at first to hear both in succession but once you subject yourself to so much music in time it begins to differentiate and happily so.

After protracted involvement with these symphonies I must say they are of their kind unexpected treasures in the early-Modern symphonic oeuvre. All that is to recommend this one to you. The performances are excellent and the music is surprising if you seriously take a chance on it. Do give it your attention if it sounds interesting.