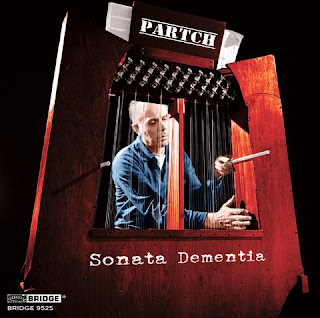 The figure of Harry Partch (1901-1974) on the American New Music landscape is a singular and totally original one. A dedicated iconoclast of absolute brilliance, where he and his music are concerned  it seems the more I hear of it, the more I feel I am in a presence like no other. We all get a chance to hear new versions and First Recordings of some chamber gems that point us ever forward. This on The Music of Harry Partch, Vol. 3, otherwise listed as its primary title Sonata Dementia (Bridge 9525). And though we will always live in a kind of astonishment about his musical instrument inventing and his expansion of tone as we know it this volume reminds us that there is much more involved as well, a kind of world outlook that marks him in the most unique way. And that can become clear when we open up to some of the smaller ensemble works and their fine performance on this release.

With the exception of the two bonus tracks (to be discussed shortly) the entire endeavor is a love labor of the "Grammy Winning ensemble" PARTCH, who most certainly seem born to the music, and as we know with Partch in the past, nothing less will do, since the performers really must "live" the Partch spirit and make it ring out with the quirky kind of authenticity of the American "folk persona" that was so much a part of Partch's world and work.

First up is "Ulysseys at  the Edge of the World" (1962), which combines trumpet, baritone sax and more "conventionally" Partchian instruments and was written for jazz trumpet master Chet Baker. It has consequently a slightly more jazzy sonance than usual. It sounds wonderful in the new recording.

The "Twelve Intrusions" (1950) too gives us a lot to contemplate, miniature gems that embody the mystery and folk rootsy-ness of Partch at his finest. The vocal parts have been realized with just the sort of mischievous prankster yet deadly dramatic-serious demeanor that Partch himself gave to the parts and as he himself performed them often enough.

"Windsong" (1958) thrives here as the first recording of the original version.

The penultimate bonus track is a short Edison Cylinder of a Native American song that Partch was called upon to transcribe for the Southwest Museum. He paraphrases it in the "Cloud Chamber Music" section of "Intrusion."

Finally in the Partch Ensemble section of the program "Sonata Dementia" (1950) in a First Recording gives us music that I for one am extremely grateful to have now. It is contained in three dramatic movements that any Partch lover will no doubt be glad to savor.

The acetates of the Partch's Eastman lecture-performance of the original adapted guitar and vocal version of "Barstow: Eight Hitchhikers' Inscriptions" (1941) is a delight and a revelation. His adapted guitar performance is an ear-opener and a fine thing on its own!

Nothing perhaps is quite as incredible as the Columbia recording of his epic Delusion of the Fury, which everyone surely should hear if not own. On the other hand this new volume gives you an excellent introduction to the more intimate chamber Partch. For the newcomer or the old friend, this album will jump out at you in ways nothing else quite can.

Posted by Grego Applegate Edwards at 9:53 AM