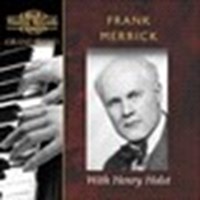 As I have said before one thing good about doing these reviews is that I end up hearing and appreciating music I otherwise would not have known about or had the chance to experience. One such offering is a four-CD set giving us "A selection of the best performances transferred from the 'Frank Herrick Society' and the 'Rare Recorded Edition' LPs" of the 1960s by pianist Franck Herrick (1886-1981) with Henry Holst on violin (1899-1991) (Nimbus/Grand Piano 4-CDs NI 8826).

Herrick may well be of legendary status in these days we live, at least over  in England. Regardless I have not before heard him, or even of him, but I am very glad to hear these excellent performances now. Wiki talks of his life and career and you might want to go there to find out more. They note that he won the Columbia Gramophone contest to write the final two movements of the Schubert "Unfinished Symphony," that in 1926. The recording of it is quite rare.

Beyond that as performer and teacher he was a pivotal figure in England. What counts for us right this moment are these vintage recordings and they are very fine. He and violinist Henry Holst mesh wonderfully well and give us sparkling and interestingly Apollonian readings of works in the lyrically Tonal and Neo-Classical Modernist realm, a rather striking, refreshing selection to me.

The opening disk and a third centers on Arnold Bax (1883-1953) and alerts us to how fascinating and moving Bax's violin-piano works are--and no less how good they sound in the Merrick-Holst readings at hand. Virtually any Anglophile would find all of it a treasure. But then any student of the 20th Century should find it absorbing too. (And that holds true of all of this music.) Bax may have fallen into eclipse even as these long unavailable '60s records were being made, and that makes them all the more remarkable I suppose because the artists clearly love the bittersweet music and make it their own, make it seem timeless. As you listen to the intricately lyrical music you feel that these fit well into the "Second English Renaissance" of the early 20th century, with Bax as a composer fully deserving to stand alongside Vaughan-Williams, Holst, Walton, etc., as a home-grown original. So the performances of his "Legend," "Ballad," and Violin Sonatas 1-3, covering the fruitful period of 1915-1927.

From there we have somewhat familiar music along with exotically lesser-known works. Nothing is uninteresting and all are played with poise and great sympathy. These are singular performance events, every one. So we get nicely burnished readings of Delius' Violin Sonata No. 2, the Sibelius Sonata in E major, op. 80, then some contrapuntal and/or expressive niceties from  Max Reger (Sonata No. 5 from 1905 and "Suite in Olden Style" from 1906). Finally among the known commodities we get the somewhat under-appreciated "Cinq Melodies" of 1920 from a fairly young Prokofiev. All of these flourish in some fine expressions.

The sound is quite decent for old LPs, the performances excellent, the program an adventure. And the price is reasonable. So take a listen by all means.


Posted by Grego Applegate Edwards at 9:24 AM