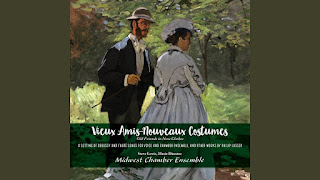 The Midwest Chamber Ensemble presents Vieux Amis-Nouveaux Costumes (Old Friends in New Costumes) (BRC Audio Productions). As the subtitle states these are "A Setting of Debussy and Faure Songs for Voice and Chamber Ensemble by Philip Lasser" and then several Lasser (b.1953)  works of his own.

The star of most of the proceedings is soprano Sarah Tannehill Anderson, who has a most engaging and delightful voice that suites this music quite well indeed. The Midwestern Chamber Ensemble, conducted in the fully instrumented works by Director Steve Lewis, rather clearly are in their element with this repertoire. The end result is a kind of conjoining magic of composition and performance, a real match of affinity.

The arrangements of the Debussy and Faure songs ("Apparition" and "Mandoline," respectively) are nothing less than exquisite, with lyrical chamber group parts that greatly enhance the songs and give us something considerable to hear and appreciate.The six Lasser songs in addition to the one apiece from the Debussy and Faure realms--taken all together there is strong lyrical Impressionistic-Modern fare to be heard and it all works marvelously well.

The second half of the program presents us with several Lasser instrumental works that provide a lyrical haunting of their own in a decidedly French lyrical manner, whether it is a matter of "The Jewely Box" for violin (Ho Man Lee) and piano (Jessica Koebbe), the Sonata for Cello (Ernan Chalshotori) and piano (Charles Dickinson) and the final, beautifully lyric "Ballade" for flute (Virginia Q. Backman) and strings.

It is all a rather ravishing program certainly and the performances are excellent. If you respond well to modern French lyricism this is no doubt going to make you happy, I very much think. Listen and enjoy.
Posted by Grego Applegate Edwards at 9:41 AM