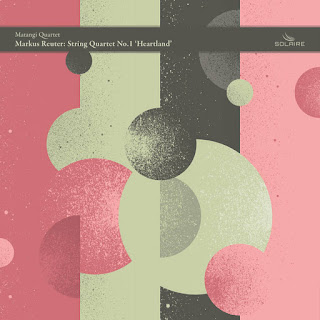 The career trajectory of composer and stick guitarist Markus Reuter follows not the typical one for a classical composer nowadays, that is unless you put him with such rock-cum-classical icons as Frank Zappa. Markus started as an important member of later editions of King Crimson and then went on his own. Currently he enjoys a fertile group interaction with the all-star Prog lineup called Stickmen.

I have valued for a long while his Prog music but it was only several years ago that I and others came to appreciate his classical composing via a video and then an official, definitive recording of his orchestra blockbuster Todmorten 513. I liked that one so well I named it one of my top picks of the year when it came out. I still love to hear it.
.
Look it up if you want to know more about how it moved me.

Amd now we have a follow-up in a fine recording of his String Quartet No. 1, "Heartland" (Solaire 8), as performed with precision and verve by the Matangi Quartet. The sound of the recording itself is pristine and detailed, as is the performance.

There is a very attractive kind of homespun quality at times to the music, which is  affirmed by the Heartland designation. Perhaps the sounds depict a wide-open land where the staples of life come to us, the basics, the essentials. So the music is essential, combining a kind of earthiness with a lyrical Modernity and an element that is pure Reuter in whatever sense I get from listening so much to his music. Call it Reutarian? Sure, maybe. It is his alone anyway.

There are eight dramatically varied movements that show a depictive arc and an arco poetics. He shows himself at this point very knowing of the string sounds he is after. The varied attacks and timbral subtleties are like the detailed outdoor life of ripening grain perhaps, complex yet direct. There is everyday life-tumble represented and also the quietness of yearning. The moods change nicely and we follow happily.

The Matangi Quartet sound fully immersed and subtly inspired for a heartful and smart reading of this wonderful music.

We have a winner! The music is strongly processual as well as lyric. The more you listen, the better it seems to me. That is a good sign, always.

Strongly recommended as an up-to-the-minute view of what Modern Art Music can sound like. Reuter is brilliant and innovative. Do not miss this!