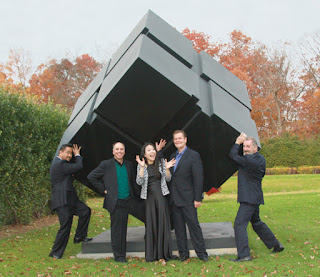 Classical music lovers in the USA have long cherished Anton Dvorak's New World Symphony as the lucid and lyrical tribute to that seemingly new morning in a new place. Native Americans might have gotten a different symphony perhaps but they were not at that point likely to listen to much symphonic fare of course.

All of us in general who explore the Classical repertoire have heard and enjoyed more of Dvorak. Two works`in the chamber realm are especially worth your time certainly, that is the "American" Quartet and the Piano Quintet in A Major, which happily it so happens there is a new recording out by the Alexander String Quartet and Joyce Yang at the piano for the latter work (Foghorn Classics FCL 2020).

The "American" Quartet as it rather rapidly came to be known was written in the summer of 1893 while the composer was staying in Spillville, Iowa, in the midst of his three-year stay as the director of the National Conservatory in New York. The music does not make direct use of American national themes but instead writes music that is his own classicization of the spirit of such music. It quickly caught on in the States on its Boston premier in January of 1894 and has been continually and deservedly appreciated since that time.

The Piano Quintet in A Major, Opus 81 was written somewhat earlier in the summer and fall of 1887, initially in the Czech countryside at Dvorak's summer home. As the fine liners to the release note, the work makes an excellent synthesis between Czech folk-like elements and latter classical Post-Brahmsian forms. It is a sheer delight to hear as is the Quartet.

The Alexander String Quartet and Joyce Yang give us spirited and compassionate readings of these works that are close to ideal. If there are no shocking reinterpretations there are also no disappointments whatsoever. It is a golden program played with the finest care for a broad sweep and finely turned detail. Bravo!
Posted by Grego Applegate Edwards at 8:57 AM