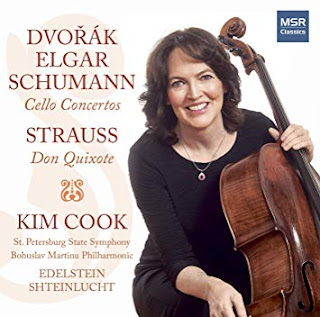 Some CD programs thrive in part because they include a good choice of repertoire that plays off of one another well to illuminate a period and do it insightfully. That is the case with cellist Kim Cook's two-CD set of middle-to-late Romantic period concerted works for cello and orchestra. On it we get a nice balance between the Cello Concertos of Dvorak, Elgar and Schumann and then Don Quixote by Richard Strauss (MSR Classics 1637), as played nicely by the St. Petersburg State Symphony or the Bohuslav Martinu Philharmonic under conductors Arkady Shreinlucht or Gerardo Edelstein.

Kim Cook come across as both Apollonian and Dionysian in equal measure. She is Romantically emotive without undue over-statement and she articulates the parts with a kind of stately steadfastness that seems quite convincing to me. And to complete the aural picture the orchestra readings seem equally balanced and clearly articulated.

The Elgar work (1919) shines forth to me as perhaps the most outstanding of the four readings. Elgar was in the later stages of his artistry when he wrote it  and this work has a touching sort of bittersweet elegance that Cook and the St. Petersburg Orchestra under Shreinlucht play out for us with thoughtfully painted pastels and shades of grey. There are moments that seem almost lighthearted, notably the Allegro Molto of the Second Movement but there is too the moving Adagio of the following movement which has a wistful remembrance, a Proustian-Madeleine sort of looking backward in the present that in the performers' hands is quite touching. The march elements of the final movement give us a feeling of time past and passing and all seems quite well in the end, as it no doubt is, comparatively speaking.

The Strauss Don Quixote was apparently (as the liners note) meant to offer a kind of comic comeback to the more dramatic-serious autobigraphical Straussian Ein Heldenleben--and some of the playfulness is nicely on display in this version. Frankly this Strauss work has for whatever reason failed to hit a nerve with me over the years but I must say this version does seem more convincing to me than perhaps some others that I regularly listen to in my collection. If one is to make a case for the brilliance of Strauss's pictoral musical prose in this work it is clear one can hear it quite well in this version.

The xecond disk has the rather classical coupling of the Dvorak and Schumann concertos, which is how I first heard them (together) when I found a Rostropovich LP in my youth and reveled in it. The Schumann sounds appropriately heroic in Ms. Cook's hands, the Dvorak expressively regal. There are other versions of course and that is not to say that these are not worth hearing and appreciating. They are. Yet so the full program is as well and gives us a nice snapshot of the cello sonata repertoire of the pre-Modern period.

Kim Cook's cello rings out without a lot of undue clamor. It is sweet without being saccharine, and there is a musically projective force that seems right for the many various emotive and tonal moods contain in the program. And in the end it all makes these four works seem more of our time perhaps than some of the older recordings I have been used to hearing. Ms. Cook goes her own way in musically pleasing ways.

I recommend this one happily, especially for those who have gaps in the cello repertoire that this set of readings fills quite nicely. And this version of Elgar should be heard by anyone with an interest in such things because it is quite fine indeed. Bravo, then!

Posted by Grego Applegate Edwards at 9:10 AM