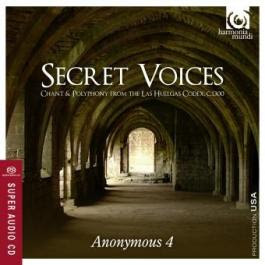 Containing a wealth of songs, organum, elaborate polyphony, sacred Latin chant, the 13th century Codex Las Huelgas was originally intended for a convent of aristocratic Castilian women. In spite of a ban on women singing polyphony, they most certainly sang it, as well as a fascinating cross-section of sacred and secular repertoire.

The acclaimed vocal quartet Anonymous Four, women all, give loving performances of 11 works from the Codex, with the very sonorous and detailed vocal presentations for which they are known. Secret Voices (Harmonia Mundi) is the latest in an ongoing series of beautiful recordings by the quartet. It will I hope serve as a bellwether for excellence in medieval vocal performance practice.

I will not rehearse the actual titles of the selections. Suffice to say that the gamut of vocal possibilites are run, from simple but sometimes ornate unison chant and song form to sophisticated four-part polyphony.

Anyone who loves the music of the Middle Ages will find this a delight, as did I.
Posted by Grego Applegate Edwards at 4:25 AM