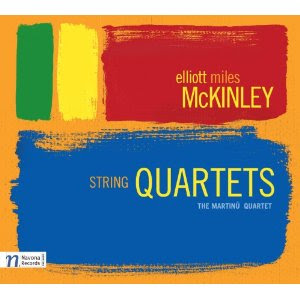 The institution of the string quartet has remained a central if sometimes more "inner-sanctum" oriented part of classical music since Haydn, Mozart, Beethoven and Schubert wrote their highly involved masterpieces for the configuration. It remains an idiomatic kind of musical retreat, often a special space for the most seriously new-form-seeking aspects of a composer's works through to today.

Elliott Miles McKinley embodies that "today" with at least six string quartets in hand. The Martinu Quartet commissioned Nos. 4-6 and perform them with great spirit and presence on the Navona (5855) release of same.

This is music of considerable depth and subtlety. High modernist for the most part, rhythmically sophisticated, the works in a way are the equivalent to some of the painterly abstractions of the New York School and beyond, in that they are intended as pure music, untrammeled by considerations of extra-musical references or vernacular expressions. Like Mozart referenced Haydn, McKinley most certainly has given some attention to the quartets of Bela Bartok and Elliott Carter. It's a lineage he fits in with and to me does not at all suffer by the comparison, but rather finds a way to extend the modernist tradition with his own inventive take.

I don't feel that a detailed analysis in this space is practical; nor do I think that it would make a great deal of difference to your appreciation of works you have not yet heard. Why? First of all because it would take me some weeks to do the music justice and secondly because my blogs tend to point the reader toward good and interesting music, more than they try to express the verbal equivalent of that music in any detailed way. Since the map cannot be the territory and overarching form becomes apparent in many sophisticated modern works through a study of the scores, etc., I shall remain mute on the details, except to say that there are many sublime moments to be heard here.

Suffice to say that Elliott McKinley has gone the distance in creating three original modern quartets and the Martinu Quartet do a fabulous job recreating them for our ears.

This one is definitely recommended!
Posted by Grego Applegate Edwards at 4:52 AM