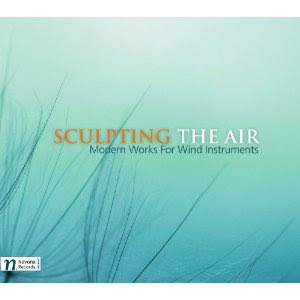 Winds and brass. They have a sound, of course. Modern composers have most certainly made them as fundamental as string and keyboard instruments in the mix of timbres they seek to realize. Not that there is anything really new there. But never as consistently have they been a part of the chamber and orchestral action.

It is to the chamber part of the action that we look today, in a nice anthology of modern works that incorporate winds and brass as principal components, Sculpting the Air (Navona 5852). Eight work by eight composers, widely varying in style from later romantic-neo-classical to classic modernism, and in varying configurations from the wind quintet to wind-piano combinations and others as well. There is much of interest for the lover of the modern and/or the wind enthusiast.

There is one "ringer" on the program, and that is Samuel Barber's lovely "Summer Music." It should be well known to many. The rendition given here is warm and expressive. On from there we hear pieces by James Adler, Russ Lombardi, Jan Van Der Roost, Barry Seroff, Brian Gillett, Juan Sebastian Lach Lau, and Richard Crosby, all relatively undersung, all living, all contributing works of interest and personality, the works all well performed.

It is an appealing program.
Posted by Grego Applegate Edwards at 4:54 AM