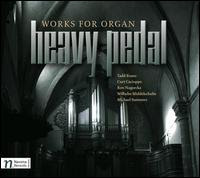 Long before there was heavy metal...there was heavy organ sounds. There's a CD that reminds you of how the concert organ can hold forth in ways that Led Zeppelin, say, cannot. And we take a look at it today. With a title like Heavy Pedal (Navona 5853) you know you are in for some dynamically BIG sounds. And that is what you get on this all-organ release. Thanks to in part nearly 100 years of Gothic horror films, many of us (myself included) associate the grand cathedral organ at full pedal with an eerieness that of course was sometimes there to begin with. After all the function of classic cathedral organ music at times was to represent the mystery of the faith, the awesome power of the godhead, the ineffable presence of the sacred unknowable in aural terms. Before the large symphony orchestra held sway it was the loudest music, more or less, that one could hear in one's everyday life. That is, if one lived in at least a moderate-sized town with a suitably large cathedral housing a grand organ.

This album has some of that. But of course none of it was composed to strike fear in our hearts. Rather it is the grandeur of the full organ sonority that is on display.

There are eight compositions composed by five 20th-21st Century composers. You probably are not overly familiar with them unless you are an organ repertoire specialist. We get works by Tadd Russo, Curt Cacioppo, Ron Nagorcka, Wilhelm Middleschulte and Michael Summers. There are big modern Gothic roars (Tadd Russo), a piece evocative of Australian Native Residents, complete with didjeredu (Nagorcka), a virtuoso piece for pedals alone, based on a theme of Bach (Middelschulte), English folksong variations (Summers) and more besides. It's not really music to invoke images of horror, nor is any of it intended to be. It is modern, but not avant garde music that takes as a starting point a certain reverence for the classic cathedral organ and the works that went before. You don't hear a great deal of Messiaen as influence, but there is the presence of the French composers that preceeded him and their winding chromatics. Then too there is a channeling of the contrapuntal classical masters Bach and Buxtehude in direct and indirect ways. All serve in part as reference points.

It is a sure-fire winner for those who cherish the organ tradition and crave the spice of modernity. And some of it sounds downright spooky. It will get a prominent spot on my CD racks somewhere between Alain and Messiaen.
Posted by Grego Applegate Edwards at 5:02 AM