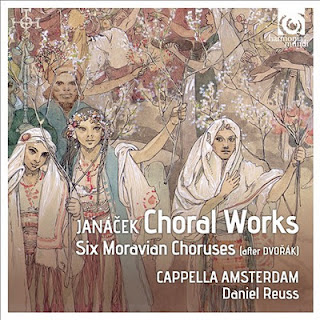 Leos Janacek was one of the most original of 20th century composers, in his own way a titan, yet at least in the States his music is not as regularly performed or recorded as one might wish. So it is especially welcome when there is a well-performed set of something one does not often find on disk, namely his Choral Works (Harmonia Mundi) as performed by Daniel Reuss leading the Capella Amsterdam. The recording just became available and it is a good one.

There are 72 delightful minutes of works not often heard on this side of the planet: they include "Six Moravian Choruses (Sechs Klange aus Mahren);" "Vlci stopa (The Wolf's Trail)," for soprano, female chorus & piano, JW 4/39; "Elegie na smrt dcery Olgy (Elegy on the Death of My Daughter Olga)," cantata for tenor, chorus & piano; "Rikadla (Nursery Rhymes)" (18) for 9 voices & 10 instruments, JW 5/17; "Otcenas," for tenor, chorus, harp & organ, JW 4/29, plus assorted miscellania.

Some are earlier works that are nonetheless of interest, some many are of the mature period and have the characteristic Janacekian contrasts, all are well performed and deserve a thorough hearing.

Recommended.
Posted by Grego Applegate Edwards at 5:16 AM