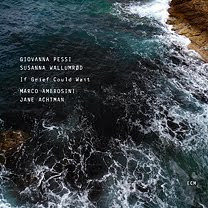 If Grief Could Wait (ECM New Series) offers a remarkable nexus of historically diverse stylistic elements, subjected to the crucible of Giovanna Pessi's arrangements, her harp and the pure-tongued vocal songbird beauty of Susanna Wallumrod. To be more specific, the two have made a most interesting selection of the songs of Henry Purcell, plus the 20th century ballads of Leonard Cohen and Nick Drake, and several by Ms. Wallumrod herself, and gone on to create arrangements of sheer beauty that manage to transcend both early music performance practices and those of the folk songwriting of the modern era to bring us to a place somewhere without location in concrete time.

The ensemble of Pessi's harp, Jane Achtman's viola da gamba and Marco Ambrosini's nyckelharpa gives off a resonant, contemplative sweet-sorrow in keeping with Late Medieval-Renaissance song ethos. When conjoined with the deeply thoughtful lyrics & Ms. Wallumrod's vocal unpretentiousness and beauty, a spell of magic weaves its way through the performances that puts it in a world of its own.

One is vaguely reminded of the folk qualities of Joanna Newsom and early Joni Mitchell as one is simultaneously put into a sweet melancholic mood brought on by the nearly timeless quality of the songs, of the new world meeting the old without scullying the impact and essence of either sensibilities.

The ensemble arrangements, the gentle beauty of the harp ensemble, Ms. Wallumrod's movingly restrained, wistful voice and the lyric beauty of the songs make for an extraordinary listening experience.

This is one of those rare albums that transcends time and place to transport us into a never-never land of forgotten worlds, of the impossible longings of people both here and no longer here. In the process Henry Purcell's songs never sounded so appealing, nor has Leonard Cohen's for that matter.

It will be available in the States in about a week. By all means, if you are a musical dreamer, do not hesitate to get it and immerse yourself in its joyous sorrows. Pessi and Wallumrod bring us to a place both fragile-vulnerable and strongly transcendent. Do not miss it!
Posted by Grego Applegate Edwards at 4:37 AM