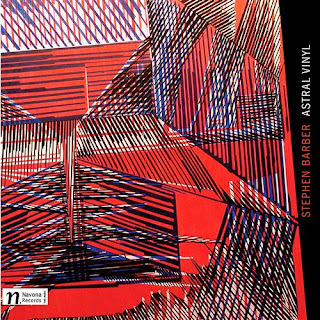 As time moves on, the idea of "something different" changes. The avant garde of today might be something considered conservative 30 years ago. Time changes things, perspectives shift and we find different aspects of music to gauge so-called progress. Sometimes, that is. Someone like Edgar Varese may be ahead of his time for a long time, perhaps for all the time our civilization has. Who can say? The chances are slim that "Arcana" will be the background music for a coffee commercial any time in the future, at any rate. And should that matter to us, really? I don't think so. You don't find microbiologists lamenting how little their work has entered the pop mainstream. Why is modern classical any different?

The music of composer Stephen Barber, on the other hand, is advanced in its eclecticism. Astral Vinyl (Navona 5850), a recent compilation of his compositions, bears this out. He has big ears. He has been absorbing the music around him. He casts a wide net. The compilation showcases 12 of his works, all for diverse combinations. There are string quartets, vocal music with piano and steel drums, chamber ensembles that let in rock elements a la Zappa, brass choirs, some electronic filtering here and there, an occasional harmonically expanded tang to the sound.

In all of these works there is eclecticism, yes, but there is a tonal Americana lurking in the wings. Maestro Barber is the son of Ives, Copland and the other Barber, spiritually. Oh, also a little Schoenberg, Webern, Berg and Stravinsky, at least to my ears. Yes, also Frank Zappa. And he brings a musical personality into the mix that pleases as it hones a lyrical craftsmanship and artistry of which, for his most characteristic works, perhaps we will say someday, "oh yes, that's Stephen Barber's music. I can tell."

Be that as it may, right now I find the music very pleasing. Posterity will do what it will, willy nilly.
Posted by Grego Applegate Edwards at 4:49 AM