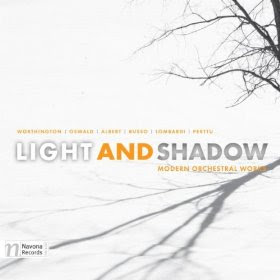 Starting off the new year of music is not a simple thing. The accumulated baggage of the preceding year of releases reviewed weighs on me and a kind of symbolic casting away and a new beginning seems requisite. On a 7AM after the official end of the holiday season here it seems doubly important to retrace steps and make a fresh start down the path to the year ahead.

These are what I might call character pieces--sketches of orchestral character, of the character-characteristics of each composer at a particular point in time addressing a musical subject. The pieces tend toward the tonal-descriptive side of modern orchestral writing.

And if there are roots to be uncovered in these works, it would tend more toward Aaron Copland than Gustav Mahler. There are off-stage allusions to rooted, earth-folk elements, vernacular elements radically transformed to the orchestral-modern idiom.

Not to sound patronizing, but you might liken these pieces to performances of character actors in golden-era Hollywood films. They have a role to play in the overall matrix; they come into the frame and do their bit and do it well. They constitute an art form in themselves and they are appreciated by contemporary audiences and remembered later for their contributions by film buffs. They aren't the leading actor-artists of their time but without them the films would drag along with too much weight and not enough light.

Each musical work is vivid, colorful, and evocative. None of them are designed to be the heavy "masterwork" opuses of our era. They are the finely executed miniatures that stand alongside the gargantuan klangs of the epoch.

And so to me this CD is a fitting start for the new year. After the revelry and frantic gestures of good cheer in bad times, a simple set of premises, the well-turned phrase, the orchestral color sketch.

These may not be works that will change the nature of music making for the future, They aren't. They are exceedingly evocative day trips into imaginative musical realms. And so they please.
Posted by Grego Applegate Edwards at 4:45 AM