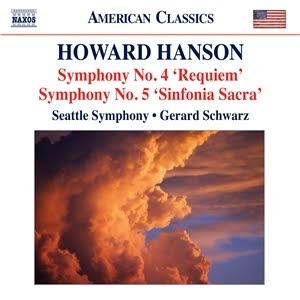 Gerard Schwarz and the Seattle Symphony continue their Hanson (1896-1981) Symphony Cycle with the release of Symphony No. 4 and Symphony No. 5 (Naxos 8.559703). There was a time when Hanson's stature as an American composer was perhaps a little more assured than it may be today. His affiliation with Eastman School of Music and his many recordings for Mercury in the '50s had something to do with it. The "Requiem" Symphony No. 4 and the "Sinfonia Sacra" No. 5 were written in 1943 and 1954, respectively, more or less as he approached the height of his reknown. They are essentially Romantic in nature. He and Samuel Barber are the principal such composers of the American 20th century as far as I am concerned, and both sooner or later came into a version of it that was pretty wholly theirs.

The middle period Hanson sometimes strikes me as being a sort of rich Nordic dessert. It is lush, sated, majestic, filled with glorious peaks and pithy quietude in alternation. The Requiem is understandably somber and elegaic; the "Sinfonia Sacre" has a slightly broader range of expression. Both occupy a kind of middle ground between some of the eclecticism of the earlier works and the breakthough of new elements and the evolving sonic palette of the last symphonies.

Gerard Schwarz and the Seattle Symphony give us detailed and broadly passionate readings that sound well in the contemporary digital recording mode. The inclusion of two more middle-length works, "Elegy in Memory of Serge Koussevitzsky" (1956) and "Dies Natalis" (1967), is a nice bonus.

At the Naxos price and with the detailed, enthusiastic readings of Maestro Schwarz, one could hardly go wrong with this disk. These recordings were originally released on Delos International in the '90s if I am not mistaken. I look forward to his versions of No. 6 and No. 7.
Posted by Grego Applegate Edwards at 4:32 AM