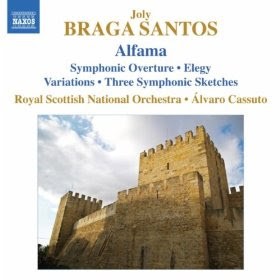 Portuguese composer Joly Bragos Santos (1924-1988), judging by the newly released Alfama (Naxos 8.573813), excels in the narrative color-drenched tone-poem of the last century as exemplified in Euro-Mediterranean composers such as Respighi, de Falla, Debussey and Ravel. This is only natural in a ballet score, that is meant to portray musically a particular story-line in ways that are vivid and danceable, and we see this perfectly in the world premiere recording of this Suite from the Ballet Alfama (1956), but it is even so of his later, more modernistic Variations for Orchestra (1976), which is also given its world premiere recording here. There are several disks out in the Naxos series on his symphonies and I have not as yet heard them, so there may be another side to his music as well.

Topping off the program are three equally interesting works, the Elegy in Memory of Vianna da Motta (1948), his Symphonic Overture No. 3 (1954) and his Three Symphonic Sketches (1962). The Royal Scottish National Orchestra performs capably under the baton of Alvaro Cassuto, and the sound staging is good.

Braga Santos most definitely deserves a hearing. This seems like a good place to start, as it has been for me.
Posted by Grego Applegate Edwards at 5:13 AM