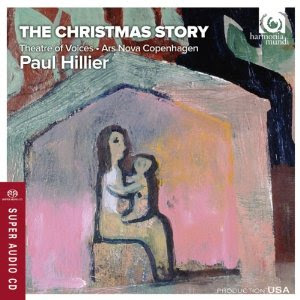 There have been a number of recordings over the years of the chronology of the Christmas Pageant as portrayed in song. Of course this is an old practice originating in England and elsewhere in the Nativity Play musical-dramatical festivities from at least medieval times onwards. Since we covered a Paul Hillier/Ars Nova Copenhagen recording two days ago, it is fitting that we turn to another more specific to the season. Maestro Hillier, ANC and the Theatre of Voices have gotten together to create A Christmas Story (Harmonia Mundi). As one might expect this is a definitive choral depiction of the story as portrayed in early music masterpieces and some from a little later as well. So you get plainchant, "O Come, O Come, Emmanuel," "Es ist ein Ros entsprungen," through the birth songs, the "We Three Kings" song and so on. It is wonderful music, mostly familiar to anyone who knows the tradition, with a few that may be unfamiliar, at least to listeners in the States, and anon.

There is light instrumental support as called for, but the ravishing vocals of the twin ensembles are the central focus. And the songs. This is first-rate fare. I am happy personally to have it. It will give you something of substance to lighten the dark nights.
Posted by Grego Applegate Edwards at 5:05 AM