David Lang, "This Was Written By Hand" for Solo Piano 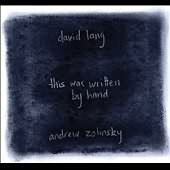 David Lang has increasingly struck me as one Bang On A Can composer who is especially bent upon forging a minimalist/post-minimalizt language all his own. The solo piano opus This Was Written By Hand (Canteloupe 21073) puts that forward somewhat emphatically. The album consists of the 13-minute title cut and eight shorter "Memory Pieces."

The "Memory Pieces" (1992-1997) have a bit more in the way of motoristic movement, sometimes marimba-istic figuration that is more typically classic minimalist. Yet it is not linear, post-African trance groove that is coming out of the figurations for the most part. For the first piece it's a matter of rolling wide-interval trills (to stretch a term) that together form an overarching melodic movement that has a slower, more majestic trajectory. The second piece calls for rapidly articulated arpeggiations that again don't have groove as the intent, but rather verticalized harmonic sequences. Piece three is a kind of largo. Piece four slows the trill idea down and makes each pulse a more fortissimo chordal block. Number five is mercurial, a kind of drumming on the piano with Lang's own sort of rudiment-like execution. Six slows things down again for some delicate interlocking sequences of expressive meditation. Seven is a whirlwind of rapid cycles of piano drumming. The final piece returns in some ways to the feeling of the first, a kind of slower series of related melodic cycles, this time in the middle range of the piano, with punctuations in the upper and lower registers.

Pianist Andrew Zolinsky realizes the parts with a restrained poeticism that seems right for these two works.

This is music that keeps my interest while playing upon the more positive emotional affects that the solo piano has often evoked from the days of Mozart onwards. It should find a good number of adherents, I would think. And it is some of David Lang's most intimate and appealing music to date.
Posted by Grego Applegate Edwards at 5:22 AM