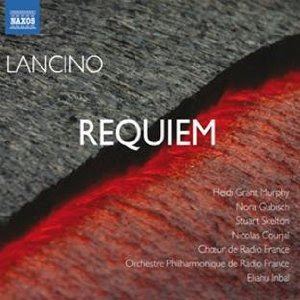 Not having been acquainted previously with the compositions of Thierry Lancino, I was pleasantly rewarded lately by listening a number of times to his dramatic Requiem (Naxos) as performed by the massed forces of Choer de Radio France, Orchestre Philharmonic de Radio France, soloists and conductor Eliahu Inbal.

It's a 70-plus minute journey into an expressively modern treatment of the requiem form. The soloists express themselves with musicality and passion, the choir and orchestra are artfully served with a score that bubbles over like a cauldron of molten fire at times, and other times indulges in pianissimo murmurs that fit the sorrowful expression of the text by the solo vocalists. The orchestra reinforces and underscores the choir and soloists, as is fitting in such a work. A kind of murky gloominess in the score at times is virtually unremitting and perhaps that is exactly as Lancino intended, as temperamentally fitting for a requiem. The singers and choir emerge out of an often muddy orchestral oppressiveness that creates a powerfully unified mood, characterizes the work and sets it apart. And I don't mean that as necessarily a negative. It makes for a different work than otherwise might be the case these days. It gives it a unique quality.

The piece as a whole has a late romantic largeness combined with high modernity-Bergian dynamic sonority and occasionally an Orffian chanting insistence.

The performance is spirited and excellent. Lancino's music has undoubtedly some considerable merit. I would most definitely like to hear more of it. If I did not respond to this work with keen absorption, it may have something to do with my current mood. I appreciate it on a cerebral level, but it is not grabbing my emotions yet. Some works take many listens before that comes about, so I reserve some of my feelings for now. It is undoubtedly a work and a performance that merit the attention of modern music lovers. At the Naxos budget price you get further incentive to envelop yourself in its dramatic sounds.
Posted by Grego Applegate Edwards at 4:43 AM