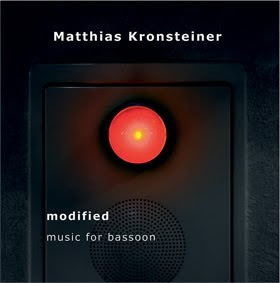 The bassoon has its many charms. It has a range of sounds all its own which, in the right hands, forms a singular timbral pallete of wide dimensions. For a time it was called upon to play the clown, especially in some late 19th century-early 20th century orchestral works. Those days are gone.

Matthis Kronsteiner is a bassoonist of stature, great facility and marvelous tone. He presents a recital of contemporary and near-contemporary compositions for bassoon alone, with small chamber configurations and with electronics on Modified, a part of the performer series on the new Composers Concordance label (005). Pieces by Villa-Lobos, David Lang, Gene Pritsker and others form a sequence that sets off Kronsteiner's virtuosity with a brilliance that keeps the ear continually attuned. In contemporary fashion the classical genre rubs shoulders with jazz, improvisation and rock, which is only fitting.

The contemporary bassoon is no jester. As incarnated in the presence of Matthias Kronsteiner, the bassoon is an eminently effective instrumental conduit of the best of today's concert music. That's clear from Modified.
Posted by Grego Applegate Edwards at 5:37 AM