Boris Yoffe, "The Song of Songs," with the Rosamunde Quartett and The Hilliard Ensemble 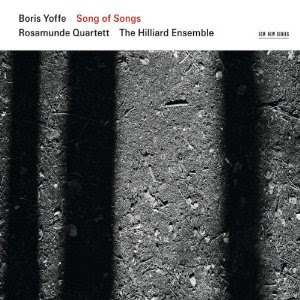 There is a group of contemporary composers, headed by Arvo Part, who have some rootedness in early music. The music tends to be thoroughly (post)modern, yet there is something of the ambiance, timbre set and periodicity of Medieval-Renaissance and sometimes early Baroque music.

One of these, judging by the new release The Song of Songs (ECM New Series 2174 4764426), is Boris Yoffe. The composer grew up in Russia, emigrated to Israel and then Germany, where he studied with Wolfgang Rihm.

His ECM debut presents a modified sort of song cycle "The Song of Songs." It deftly alternates and conjoins the Rosamunde String Quartett with the quartet of vocalists well-known as the Hilliard Ensemble. At times the strings sound like a consort of viols from the Renaissance. The vocal configuration of countertenor, tenor, tenor and baritone have a sound that of course recalls early music as well. Yoffe puts these possibilities into play in a way that has one foot in the distant past and one foot in, if you will, the future.

The music has modern harmonic-melodic elements but at the same time hearkens back. The use of space and a reverberant, cathedral-like sonic stage reinforces that impression. This is a composer who thrives in the ECM production situation. There's something of Hindemith in there, but transposed both forwards and backwards, slowed down at times to a maximum of contemplative near-quiescence, a Morton-Feldman-like feeling of timelessness from another age. Ours.

Beautiful music, original music, this is.
Posted by Grego Applegate Edwards at 5:17 AM