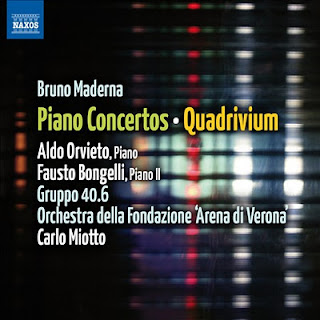 Since his sudden death in 1973 we may have been guilty of forgetting about composer Bruno Maderna's music just a bit. Yet his signal achievements in the thick of high modernism, and his position of pre-eminence among a small group of the most highly regarded Italian composers of his generation should have ensured him an enduring reputation.

All is not lost. There was a period of reaction for a time, where high modernism declined in fashion and his reputation suffered along with many others of his era. Yet his music never had a dogmatic quality. It drew on early music as well as it looked forward to a futurist avant-topia. At any rate he is a master figure in the music of his day. And things may be changing in how we perceive him and the modernist period in general.

As if to remind us of what an appealing composer he is, a new recording of his Piano Concertos and the Quadrivium piece (Naxos 8.572642) has emerged of late. On it pianists Aldo Orvieto and Fausto Bongelli (the latter for the two-piano pieces), the percussion ensemble Gruppo 40.6, and Orchestra della Fondazione 'Arena di Verona' under conductor Carlo Miotto put together a program of Maderna convering both early (1942-48) and later (1969) phases of his ouevre.

The early Piano Concerto (1942) in both a one and two piano version are given here, the second a world premier recording, and it shows those of us who may have forgotten, how his early work has an appealing modern-lyrical poignancy. The second version increases the sonority of the piano part and so is a most welcome addition to this disc. The Concerto for Two Pianos and Instruments (1948) sees Maderna moving forward to a more 12-tone oriented style with the percussion ensemble understandably supplying sound coloration aspects that set this work apart from the earlier concerto. Quadrivium (1969) is Maderna in full flower, a writer of a poetic quality, with mystery and an impressively evocative sonority. This is the Maderna of genius, beyond serialist dogma, a supreme painter of sounds.

The performances are excellent. The program fleshes out a picture of Maderna as a vital force within the music of his time. This recording is a very good one for those who don't know his music. It is equally stimulating for those that do.
Posted by Grego Applegate Edwards at 4:53 AM